Shabbat 2: From Place to Place 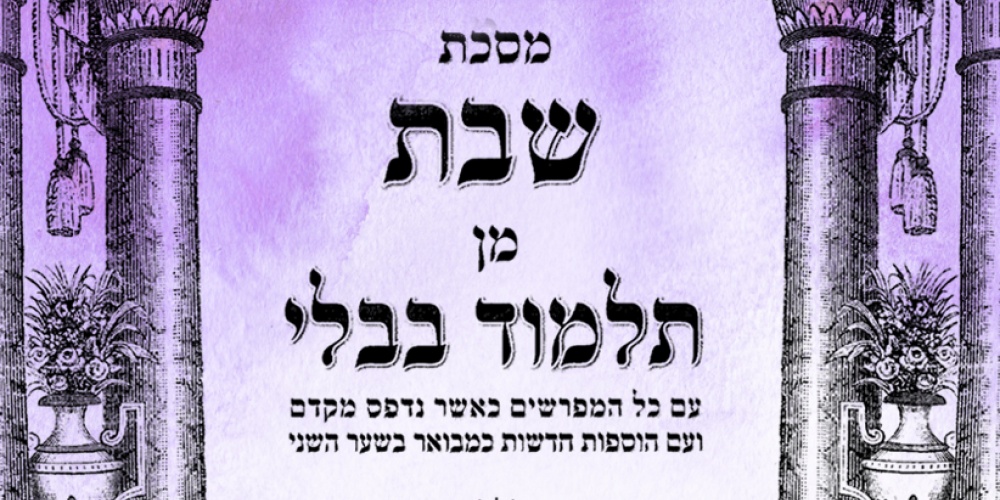 “The carrying out on Shabbat are two that are four [for one] inside [a home] and two that are four [for one] outside [the home]” (Shabbat 2a). The Mishna discusses who violates Shabbat, and under what circumstances, when an object is passed from a private, “inside”, to a public, “outside”, domain. It is with these laws of carrying that we begin masechet Shabbat, the opening tractate of Seder Moed, detailing the laws relating to the special occasions, moadot, of the year.

“Zachor et Yom haShabbat lekadsho” and “Shamor et Yom haShabbat lekadsho” are the two primary Torah mitzvot related to the Shabbat. Our Rabbis understood that zachor, literally meaning “to remember”, but understood by our Sages to also mean “to mention” (and we best remember something when we mention it aloud), obligates us to declare the unique nature of the day. On a Biblical level, this can be done by simply mentioning the Shabbat, something we do when we daven on Friday night. Our Sages required that we fulfil this mitzvah through the recital of kiddush on a cup of wine. Interestingly, the laws of kiddush are discussed not in masechet Shabbat, but primarily in masechet Pesachim where, in addition to kiddush, we must drink three additional cups of wine.

Masechet Shabbat focuses on the “shamor” aspect of Shabbat, the obligation to guard and protect the Shabbat by not acting in a way that desecrates the Shabbat. The Torah gives us precious little information on what exactly would qualify as the “non-guarding” of Shabbat. The only Shabbat prohibitions explicitly mentioned in the Torah are that of “lighting a fire” (Shemot 35:3) and “ploughing and harvesting” (Shemot 34:21). Fascinatingly, many of our Sages teach that the Torah prohibition of ploughing and harvesting described here refers not to the weekly Shabbat, but to the “Shabbat to G-d”, namely, the shmitta year[1], leaving the melacha of lighting a fire as the only melacha specifically referring to Shabbat.

Our Sages, through “reading between the lines” of the Torah, defined 39 activities—Av Melachot, creative acts—that are forbidden on Shabbat[2]. It is the delineation of the parameters of these 39 melachot that take up the bulk of the masechet which, in the standard Vilna edition, is 156 pages, the second longest of the Talmud.

Yet it is only in the seventh chapter, on page 73a, that the list of these forbidden activities appears. The first six chapters focus to a large degree on the “preparations” for Shabbat. Thus, with the exception of the first Mishna, the first chapter lists those activities that are forbidden on Friday afternoons, lest they lead to inadvertent violation of Shabbat. The second chapter begins by asking, “With which [oils and wicks] may we light [the Shabbat candles] and with which [oils and wicks] may we not light [the Shabbat candles]?” The third and fourth chapters discuss food preparations needed for Shabbat, i.e., what we may and must do on Friday to enable one to eat well on Shabbat. The fifth chapter discusses preparing our animals for Shabbat, ensuring that they are not working on our behalf, and the sixth chapter discusses what jewellery and other paraphernalia may and may not be worn on Shabbat, either because one may accidentally take it off and carry it, or because it cannot be considered clothing and hence, one would violate the prohibition of carrying even without removing it.

Left unexplained is why the masechet opens with the laws of carrying. This Mishna seemingly belongs in the seventh chapter (or beyond) after the listing of the 39 melachot. And if one were to begin with a melacha, carrying would be the last to with which to begin. When the Mishna lists the 39 melachot, carrying is the very last one listed, further making us wonder, why begin Shabbat with its laws?

In discussing this question, the Tosafists (Shabbat 2a, s.v. Yetziot) offer a number of possibilities. They explain that this Mishna is first because it “was beloved”, containing a number of important legal principles, the details of which need not concern us here. Rabbeinu Tam explains that the melacha of carrying is more commonly violated than other melachot. Its laws are complex and people often don’t take this particular prohibition seriously. It is, in his words, a “melacha gruah, a weak melacha”, one whose logic people question.

The other melachot are transformative acts, in which we create something new that did not exist prior. Whether it’s baking bread, making clothing or building a home, we can readily understand why these acts are prohibited. But what creative act has been performed in moving an object from point A to point B? Nothing new has been created, the forces of nature have not been harnessed—all that has changed is the location of an object.

The evolving events of the past few weeks help us to easily explain this prohibition. It is the movement[3] of goods from point A to point B that is the backbone of our economic existence, allowing society to create wealth. With borders closed and the free flow of goods curtailed, the world economy is in a freefall. The melacha of carrying, the original and most basic form of transportation, is listed as the last of the 39 melachot because it is the foundation on which the other melachot rest. One can create all one wants, but if one cannot transport the created product from the private to the public domain and bring it to market, the product is pretty much useless.

Man, the pinnacle of creation, is the ultimate explorer, moving from place to place seeking new opportunities and new discoveries. Ordering people not to travel or even leave home goes against human nature.

Shabbat is the day man withdraws from his creative work, a necessary respite to internalize that it is G-d who runs the world and is the ultimate Creator. But this is meant to be the case only on Shabbat. Let us pray that all will be able to fulfill the verse (Shemot 16:29), “Let everyone remain where he is: let no one leave his place on the seventh day” on the seventh day, but no other[4].

[1] This is beyond striking. It is clear that the p’shat of the pasuk refers to Shabbat. Furthermore, the Torah specifically prohibits working the land in shmitta, so there is no need for the Torah to repeat the prohibition. Hence, according to these Sages, the pasuk teaches that we must “add from the profane to the holiday” such that the laws of shmitta actually begin before the seventh year starts.

[2] PG in a future post, we will discuss the origin of the 39 melachot.

[3] This parallels the process of creation itself. On the first three “days” G-d created light, the heavens and the seas, and dry land. On “days” four through six, movement was added to these static creations; the heavenly bodies in orbit, the flying birds of heaven and swimming fish of the sea, and finally the animals and humans that roam the earth.

[4] Most interesting, it is from this verse that our Sages derive the prohibition of carrying on Shabbat.