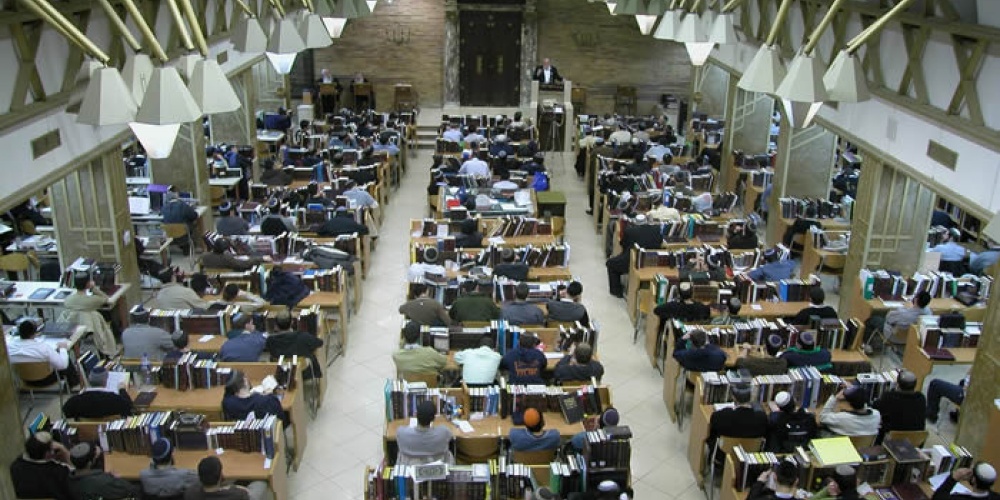 Learning Torah is meant to be enjoyable. It is for this reason that a mourner is not permitted to learn (Moed Katan 21a) [1]--the joy that learning engenders is not appropriate for a mourner.

One of the ways we express joy is through song and music, and it follows that Torah is to be expressed in song. In fact, the Torah itself is self-described as a song--the last of the 613 mitzvoth being to "write down this song" (Devarim 31:19), which is understood by our Sages as obligating us to write our own complete sefer Torah[2].

"Rav Shaftai said in the name of Rav Yochanan: Whoever reads [the Torah] without ne'imah, a melody, or learns without zimra, song, upon him the verse says, 'and I have given them statutes that are not good and laws that they do not live with" (Yechezkel 20:25, Megillah 32a). One may study Torah, but unless one does it with song, it amounts to very little. Saying something and singing something are two very different modes of expression. We must sing as we study, demonstrating most naturally our love for Torah and the joy its study brings us.

One of the beautiful sounds of the Beit Midrash is the singsong of many creating a symphony of song--it may lack musical precision, but it touches the heart like little else. This is why many who have spent time in a Beit Midrash find it very difficult to study in a library, where the sounds of study are a major distraction. Even "sad songs", reflecting the sad parts of Torah--parts that mourners are permitted to study--evoke longing for the ideas expressed therein.

The Shulchan Aruch (Orach Chaim 691:1) quotes the teaching of the Maharil (14th century Germany) that one is not allowed to change the traditional tunes used in davening. Can one imagine Yom Kippur without the traditional tune for Kol Nidrei, Shavuot without the classic tune for Akdamut, or even Eicha without its melancholy tune?[3] In addition to the emotions unleashed by song, there seems to be a more practical side to this ruling. Tosafot offers a historical understanding of the need for song. As we all know, it is much easier to memorize something if one sings it. Originally, Torah was studied only orally, and was forbidden to be written down, making singing what one learned that much more crucial[4].

Rashi comments on the word ne'imah, a melody, "for example, ta'amei hamikraot, the notes of cantillation". While the ta'amei hamikra reflect musical notes--with many musical traditions--they are actually the first commentary to the Chumash and according to some views, these notes date back to Sinai[5].

The te'amim indicate where we are to pause, what words should be joined together, and even where we are to put our accent. For reasons I cannot fathom, very few schools teach Chumash using te'amei hamikra. Doing such (and I hope some school principals are reading this) would make it easier to learn (and memorize) Chumash, would add to the understanding of the text, and would most likely remove much of the boredom many students have with the recital of the text without melody.

The values and yearnings of a culture are reflected by its music. Choosing the Beatles over Beethoven reflects much more than musical taste. The Torah is a beautiful song that  comes in many octaves and can hit all kinds of notes. Whether minor or major, we must sing as we learn, so that we will be inspired to greater learning, adding more and more song.

[1] The Torah is a Torat Chaim, a book of eternal life. Torah and death are contradictory notions, and it is inappropriate to study such in a shiva house, both for mourners and those who come to offer comfort. This also may explain why kohanim are forbidden to become impure--impurity being caused by contact with death. Designated as teachers of Torah, kohanim were forbidden to contact impurity.

[2] For a beautiful elaboration of how the Torah is a song, see the introduction of the Netziv to his commentary on the Torah, Emek Davar, and/or see this summary (in English) here.

[3] While the exact limits of this prohibition are subject to discussion, suffice it to say that the vast majority of our shuls do not fully comply with this ruling. While employing popular tunes for the davening may (or may not) make them more attractive, more often than not, these tunes fail to reflect the mood the words are meant to evoke.

[4] In addition to limiting this teaching to historical circumstances, something there is little hint of in the teaching, Rav Yochanan himself lived in the generation after the Mishnah was put in writing. Perhaps during the time of the Tosafists, singing had gone out of style and they try to justify this practice--perhaps!

[5] While common practice is not to correct a ba'al koreh who makes a mistake in these notes, many--and for good reason--were very strict, insisting the these too be chanted correctly as they are much more than musical notes.