Pesachim 43: Chametz at the Seder 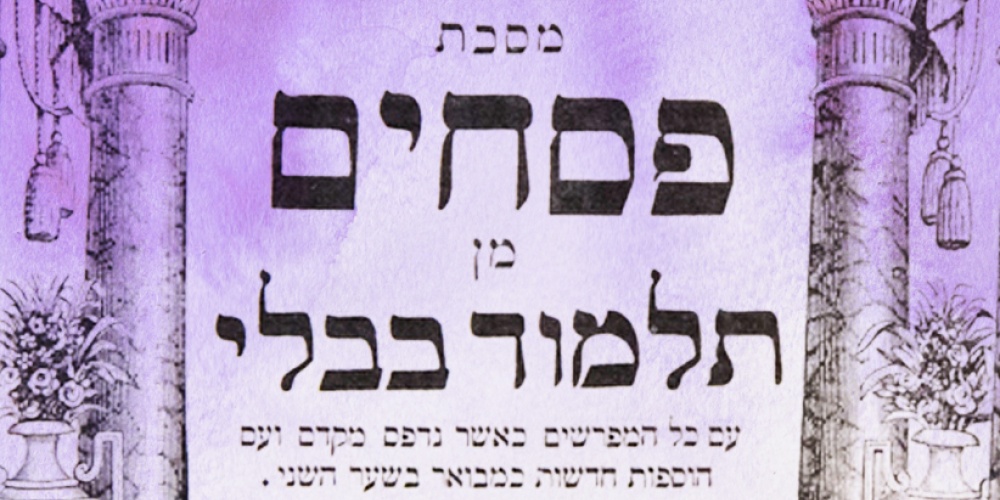 In our last post, we discussed the fascinating view of Rabbi Yehuda (at least, as understood by Rashi) that the prohibition of eating chametz on Pesach does not apply to chametz that is owned by a non-Jew. In this post, I would like to discuss a hava aminah, a theoretical possibility, raised by the Gemara that women might not be included in the prohibition of eating chametz, allowing them to feast on some freshly baked bread while the men in the family eat tasteless wafers. While this possibility, like the view of Rabbi Yehuda, is rejected, serious Gemara study requires that we study a hava aminah, a rejected initial thought, seriously. And even if in practice, such views may not be followed, they may have much to teach us as we gain a deeper appreciation of Jewish legal philosophy[1].

On the face of it, there should be little difference between men and women regarding one’s obligations in mitzvot. Mitzvot are meant to elevate, refine and sanctify; and both men and women should strive to be elevated, refined and sanctified. Commentaries have struggled—with little success—to understand the rationale behind the ruling of the Mishna that women are exempt from time-bound positive mitzvot[2] (Kiddushin 29a).

Even more difficult to understand would be any differences regarding mitzvot lo ta’aseh, negative precepts. It is one thing to be exempt from a positive action, yet quite another to be allowed to violate a Torah law that others must observe. Presumably, the mitzvot lo ta’aseh are prohibited either because they are morally misguided, or detract from proper religious devotion to G-d. It should matter little whether one is male or female—all are equally obligated to live a moral and religious Jewish life. Thus, that same Mishna rules that when it comes to mitzvot lo ta’aseh, there is no distinction between men and women[3].

And yet, the Gemara entertains the notion that women might have been allowed to eat chametz on Pesach.

“Kol, all, who eat leaven, that soul shall be cut off from the congregation of Israel” (Shemot 12:19). The word kol, appears superfluous. Had the verse said, “those who eat chametz will be cut off”, we would know very well the punishment for eating chametz on Pesach. The Gemara explains that the word “kol” is needed in order to teach that women are included in the prohibition of eating chametz on Peasch. The Gemara objects, noting that there is no distinction between men and women regarding negative precepts, even quoting the Biblical verse, “man or woman who does any of the sins against people” (Bamidbar 5:6) to prove the point. Hence, there is no need for an extra word to teach that women may not eat chametz. The Gemara answers that yes, there is. Without the word kol, one might have argued that chametz is an exception to the rule, and that women may actually eat chametz on Pesach.

Why we might think so is due to the fact that the Torah links the prohibition of chametz with the mitzvah of matzah. “You shall not eat anything leavened with it [the korban pesach]; for seven days thereafter, you shall eat unleavened bread” (Devarim 16:3). Due to this linkage, one might have thought that only those required to eat matzah must desist from eating chametz on Pesach. With matzah being a positive time-bound mitzvah and hence, not incumbent on women—or so the Gemara argues at this point—we need the extra word kol to teach us that, despite their exemption from eating matzah, women nonetheless may not eat chametz.

With the prohibition to eat chametz established, the Gemara then flips the linkage on its head, reaching the exact opposite conclusion regarding matzah. Once we establish that women are forbidden from eating chametz, and with chametz and matzah linked, we can derive that it is matzah that is the exception to the rule, and women are, in fact, obligated to eat matzah on Pesach.

What is left unexplained is the logic of even entertaining the notion that women might be allowed to eat chametz on Pesach. Perhaps the following thoughts have some merit. (And I would love to hear better suggestions.)

The prohibition of eating chametz on Pesach seems quite odd. Pesach is the time we celebrate our freedom. Celebrating the holiday requires that we eat a festive meal and the Pesach seder is meant to be the most elaborate and fanciest meal of the year. We indulge in four cups of wine, eat a nice appetizer and the best of meats, culminating with a special dessert, whose taste is meant to remain on our palates. Eating matzah at such a meal is out of place. Should we not have the fanciest of breads? Just as we borrowed the Roman custom of leaning, should we not copy the Egyptian custom of eating bread, demonstrating that while these ancient civilizations no longer exist, the Jewish people have an uninterrupted tradition dating back 4,000 years? Moreover, matzah was the poor man’s bread we ate as slaves in Egypt. Why celebrate our freedom by eating the food of a slave?

The Gemara (Sotah 11b) tells us that in the merit of righteous women, we were redeemed from Egypt. The women maintained their faith, encouraging their husbands not to lose theirs. They planned for the future even in the difficult present. According to our Sages, they did not participate in the sin of the golden calf, nor that of the spies. It was the daughters of Tzelofchad who displayed love of the Land of Israel. These Jewish women had truly left Egypt. They were psychologically free even as they were enslaved in Egypt. Once they left, there was no need to remind themselves of their days in Egypt.

The men did not reach such heights. They constantly yearned to go back to the “good life” in Egypt and, unable to shake off a slave mentality, had to die in the desert. Even in freedom, they were never quite free. For them, matzah was a necessary reminder of the need to break away from Egypt, “so that we never return there”. The men needed a reminder of slavery, enabling them to appreciate freedom.

Ultimately, the Gemara is clear that both men women may not eat chametz on Pesach. All of us today need to remind ourselves how precious freedom is and how easily it can be lost. We need have a taste of slavery to inspire us to work for freedom for all.

[1] While a major purpose of Torah study is to know how to act in practice, it is far from the only—or perhaps, even the primary—goal of Torah study. Anyone who has spent time in a Beit Midrash can readily see the minimal importance placed on the practical aspects of Talmudic study. If one were interested primarily in practical Jewish law, one would not study Talmud at all, focusing instead on the codes of Jewish law. Studying the rejected views of Beit Shammai is no less a fulfilment of the mitzvah of Talmud Torah than studying the accepted views of Beit Hillel.

To the best of my knowledge, no one has ever suggested that it is a greater mitzvah to study the biblical laws of Shabbat than the rabbinic laws of Purim. Our Sages go so far as to suggest that the Torah itself presents laws “that never were and never will be”. With Torah being an expression of the Divine, not all aspects of heaven have a practical application on earth—but there is much more to study than its practical application. Needless to say, the practical is of great, and according to many, primary importance. Much depends on the time, place, and person.

[2] It is a bit of a misnomer to call this a rule, as there are almost as many exceptions to the rule as are covered by the rule itself. Women are obligated in kiddush, lighting the menorah, hearing the megillah, sippur yetziat mitzraim, eating three meals on Shabbat, and, as we shall see, matzah.

[3] The primary exception is that of coming in contact with a dead body, with a women kohen allowed to come into such contact. Presumably, the prohibition is rooted in the fact that male, and only male, kohanim worked in the Temple. As it is the place where the Divine Presence rests, one who works there is precluded from coming into contact with death. And while not in the Temple, which is the vast majority of the time, the kohanim were the teachers of Torah, a Torah of life; and hence, restricted from coming into contact with the dead.