Sanhedrin 24: Down with Bavel! 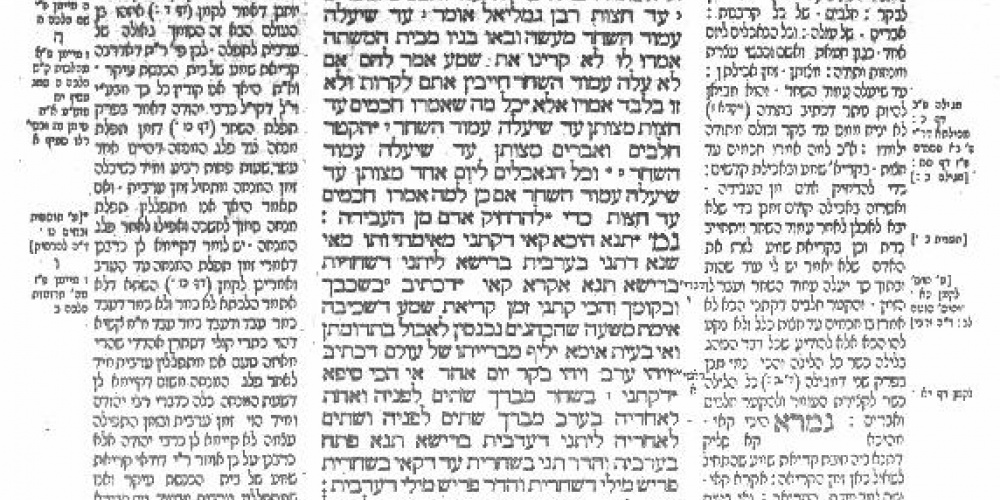 We are all products of—and greatly influenced by—our environments, which is why our Sages put so much emphasis on ensuring that we live in a place conducive to our spiritual and physical well-being (see Sanhedrin 17b and here). It is not only our immediate surroundings that hold great sway over us (and, if we are lucky, we over them) but our broader environment. Those of us who grew up in western, democratic countries have absorbed many of its underlying values, many of which are in consonance with and based on Jewish values. Liberty, justice, equality before the law, intellectual honesty, and civic pride are all rooted in the Torah.

On a more local level, where we go to school can have a great impact on our modes of thought, styles of study, curricula, openness to opposing ideas, even types of exams. This varies not only from country to country, but also within a given country or city. And when the institutions compete with each other, they often go to great lengths to point out the differences between them. It should come as no surprise that the Talmudic academies in Israel and Bavel had their own individual styles of learning, and the products of each could even be identified by certain character traits.

Working on the assumption that there must be a plausible explanation[1] for the view of Rav Meir, out of whose “holy mouth” this ruling came, Reish Lakish explains that we are dealing with a case where originally, the litigants had agreed to “accept one witness like two"[2], and then before the case started, one of them changed their minds. While the Sages argue that once this condition has been agreed to, one may not renege—unless one can show that the witness is a relative or untrustworthy—Rav Meir allows exactly that. Instead of rejecting Rav Meir’s view, Reish Lakish “called Rav Meir the holy one, because he loved him, and he explained his logic so that it could be accepted” (Rashi, Sanhedrin 24a, s.v. bo ure’eh)

The Gemara sees this as part of a larger phenomenon specifically relating to the Sages of the Land of Israel, the home of Rav Meir and Reish Lakish. “Come and see how much they [the Sages of Israel] love each other” (Sanhedrin 24a). To further demonstrate such, the Gemara relates that Rebbe Yehuda HaNassi ruled that it is forbidden to encase cold water in the ground on Shabbat in order to prevent it from being heated by the sun. However, when Rabbi Yishmael told him that his (Rabbi Yishmael’s) father Rabbi Yossi allowed it, Rebbe immediately retracted, noting that “the elder one has ruled”. There was no reason for Rebbe to change his mind—other than the fact that another rabbi had allowed it. Rebbe did not agree with Rav Yossi, but he deferred to him.

Commenting on this some five generations later–and as we shall see, lamenting its rarity–Rav Pappa notes the beautiful love one Sage shows another. In this particular case, he notes that had Rav Yossi been alive at the same time as Rebbe he would have sat submissively before Rebbe, because his son and worthy successor Rabbi Yishmael did just that[3], demonstrating Rebbe's superiority in learning[4]. Nonetheless, Rebbe lovingly accepted the ruling of Rabbi Yossi. The fact that Rav Yossi’s ruling was more lenient makes this even more noteworthy.

Alas, such was not duplicated in Bavel. “Rav Oshiah said: What is the meaning of the verse, ‘And I took unto me the two staves; the one I called no'am [graciousness] and the other I called 'chovlim' [those who injure]. 'No'am' refers to the scholars of the Land of Israel, who treat each other graciously [man'imim] when engaged in halachic debates; 'chovlim', to the scholars of Babylon, who injure each other in matters of Jewish law” (Sanhedrin 24a).

Rav Oshiah, in a critique of the Babylonian style of learning, notes their argumentative and even injurious style, contrasting this to the much more pleasant and accepting style of the scholars of Israel. In Bavel, the instinctive reaction to a colleague’s teaching was to question its veracity and offer an alternate view, whereas the approach favoured in Israel was to collaboratively study together to reach a consensus. And the Jerusalem Talmud has many fewer debates than the Talmud Bavli. Furthermore, the language of disagreement in Bavel was often harsh, and put downs, even insults, are not uncommon.

Perhaps this was an inevitable result of exile – but such became the (sad) norm of Jewish debate, so much so that after close to 2,000 years of exile, the Babylonian style of learning is most common even in the land of Israel.

In his commentary Iyun Yaakov, Rav Yaakov Reischer, suggests that these different learning styles reflected the great meticulousness of the Sages of Israel in ensuring they did not embarrass one another (Bava Metzia 58b). They feared that if they more readily attacked and critiqued the viewpoints of their colleagues they would cause embarrassment, and they wanted to avoid that at all costs. Admittedly, such an approach comes at a price. By playing nice, they lowered the level of learning; it is by constantly questioning and challenging each other that the level of learning can be raised for all. Yet the Iyun Yaakov notes that it is especially important in the land of Israel to be most meticulous in ensuring we do not cause embarrassment to others. While it is prohibited everywhere, the shaming of others causes more harm in the land of Israel.

“Ulla says: the Torah scholars of Bavel stand for one another” (Bava Metzia 33a). The Iyun Yaakov suggests that only in Bavel did they stand for one another, but not so in Israel. Because no teaching was safe from attack, they “sharpened one another” and thus, owed a great debt of gratitude to their disputants. Such was not the case in Israel and thus, there was little need to stand for other scholars who willingly accepted the arguments of others.

Fascinatingly, and perhaps contradicting his own explanation above—that the reason the Jews in Israel did not question each other as much as they should have was for fear of embarrassing each other—the Iyun Yaakov claims that the argumentative approach, while perhaps beneficial for Bavel, is not necessary in the land of Israel. There, “the air makes one wise” and the truth can be ascertained without such harsh debates – something that does seem to mesh with current realities.

Our Torah is both a Torah where “all its pathways are [meant to be] those of peace” (Mishlei 3:17) and where “Moshe is true and his Torah is true.” Balancing these two pillars is not always easy. If, for the past couple of millennium, learning has focused on seeking truth at all costs, perhaps with our return to the Land of Israel it is time to focus on seeking peace at all costs. And that, I would argue, applies even to those still living in “Bavel[5]”.

[1] While this is a most reasonable assumption, one might be tempted to take Rav Meir’s (strange) ruling at face value, and thus reject it out of hand. The Gemara explains that we do not follow the rulings of Rav Meir because though “there was no one in his generation [as brilliant] as Rav Meir… his contemporaries could not fathom the depths of his reasoning, for he would say the impure is pure and show why this is so, and he would say the pure is impure and show why this is so” (Eiruvin 13b).

[2] While both criminal and civil law require two witnesses, there is a fundamental difference between the two. In regard to civil cases, one may agree to waive the Torah requirements and accept the testimony of one witness or the testimony of those who would otherwise be invalid, such as a relative. This is part of the rule that when it comes to monetary matters, “one can make conditions not in accordance with the laws of the Torah” (see Bava Metzia 94a). After all, it’s my money and (with certain limitations—such as keeping it all for myself) I can do with it as I please.

[3] This is a fascinating assertion. Because we know how the son acted, we can surmise how the father would have acted. What an assertion of the kibbud av that Rabbi Yishmael must have displayed to his father.

[4] The fact that Rebbe was the one to edit the Mishna is a clear sign of his greatness in learning. It is not by chance that he is known as Rebbe, our teacher, with no need to attach a name.

[5] Bavel has long been understood as a reference to the Jews everywhere in the Diaspora. That may help to explain why we pray for rain in America based on the seasons of Babylon.