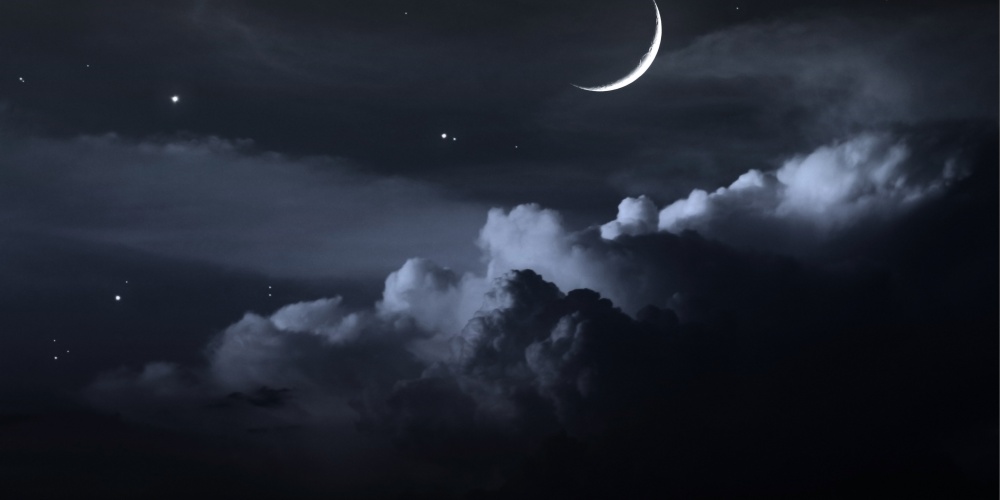 It is customary that on the shabbat before a new month we "announce" its arrival with a prayer that the upcoming month be filled with the blessings of life. Yet strangely enough the rosh chodesh benching is omitted on the shabbat before Rosh Hashanah. In the times of the Talmud the court would send messengers to inform the Jews of the Diaspora as to the actual day of the new moon declaration. If we are to assume that the "announcement" in shul is derived from this practice, perhaps it was considered unnecessary for the month of Tishrei. With all the excitement before yom tov there should be no need to inform or remind people when Rosh Hashanah would occur.

However, like all Jewish customs, there is a deeper reason than just practicality. "Blow the shofar at the moon's renewal (bkeseh) ...because it is a decree for Israel, a judgment day for the G-d of Yaakov" (Tehillim 81:4). Our Sages, using a play on the word keseh, which also means covered, declare that we are to blow the shofar on the day when the moon is "covered," meaning the first of the month. Apparently, we are to hide the fact that it is the new moon and instead concentrate on the fact that it is the new year. A new month loses its significance when accompanied by a new year, just as a new year pales in comparison to the dawn of a new decade. Rosh Hashanah overshadows Rosh Chodesh.

Our calendar is a based on both lunar and solar calculations. While our months are based on lunar cycles of twenty-nine and one half days, our years are based on the sun and hence Pesach must always be in the spring and Sukkot in the fall. While originally created equal in size - "and G-d made the two great [and equal] lights", (Breisheet 1: 16) - it was the sun which was to take on much greater significance, "the greater light to rule in the day and the lesser light to rule the night." The light of the moon was concealed soon after creation and is now only a reflection of the sun. During the monthly sanctification of the moon we say "may it be your will, my G-d and the G-d of my forefathers to fill the flaws of the moon, that there be no diminution in it". On Rosh Hashanah we acknowledge and pay homage to G-d as the Creator of the world. This is not the time to make mention of a flawed moon.

The flawed moon is in reality a product of its own doing. Why should G-d create equally sized sun and moon, only to diminish the moon's size? The Sages of the Midrash, ever so sensitive to nuances in the text, detected that it was due to the fact that the moon complained that it had to share its glory. "Two kings can not share one throne." Hence, contrary to the moon's expectations, it was decreed that only the sun would wear the crown, and the moon would be relegated to being the handmaiden of the sun. The moon is thus a symbol of jealousy, and has no place in our Rosh Hashanah prayers.

The purpose of the shofar and our tefillot on Rosh Hashanah is to induce us towards character refinement individually and collectively as a community. "Jealousy removes a man from this world (Avot 4:28)." We must at this time of year keep the "sin" of the moon hidden from us. Our task must be to restore the moon to its original glory, something we can do if not physically, then at least symbolically, by working together for the sake of heaven.

Not coincidentally, the first mitzva given to the Jewish people as they prepared for the exodus was the mitzva to sanctify the moon. Community can be built only if people put aside their jealous tendencies and work for the common good even if the credit they receive is diminished. Whereas most mitzvot of the Torah were given to Moshe only, the mitzva of kiddush hachodesh, sanctification of the new moon, was given to Moshe and Aharon as a brotherly unit. Unfortunately, all too often brothers compete with, instead of co-operate with, each other. Let us work together so that our prayers for "long life, a life of peace ... a life in which Hashem fulfills our heartfelt requests for the good" will be positively answered.