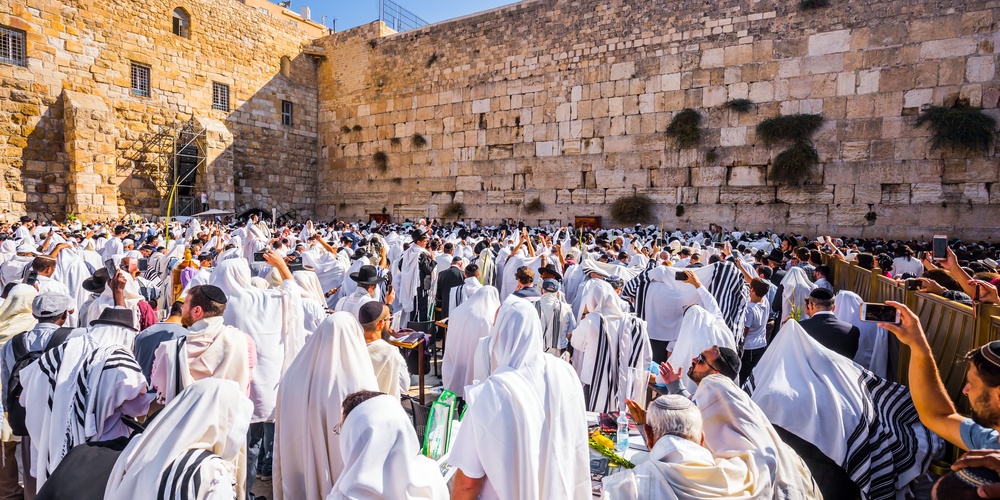 One of the key ways by which groups self-identify is through the medium of clothes. Almost all religions have some form of dress code or uniforms, which aim to foster a sense of uniformity in action and sometimes in thought and are the norm among such diverse groups as the police force, athletes, fast-food workers and airlines.

The more casual business attire now widely accepted reflects the desire for individuality in the workplace as society becomes much more attuned to quality-of-life issues. As styles of clothing reflect the cultural mores of the time, it is to be expected that often, the first sign of rebellion against the accepted norms of one's environment is through a change of dress. Yet it should be obvious that clothing is no more than an external garment and does not necessarily reflect the essence of the person.

"These are the vestments that they shall make: a breastplate, an ephod (vest), a robe, a knitted tunic, a turban and a sash" (Shemot 28:4). The Torah is quite insistent that those who worked in the Temple be appropriately dressed. Failure to do so made one liable to "death at the hands of heaven".

Throughout sefer Breisheet, clothes are often associated with sin. Rivka dresses Yaakov in Eisav’s clothes so he can fool his father. The exile to Egypt is a result of the coat of Yosef. The brothers then dip that coat into the blood of a se’ir izzim, a goat, to trick Yaakov into believing Yosef had been killed[1]. Tamar takes off her “widow’s clothes” to sin with Yehuda and Potiphar’s wife tears off the clothes of Yosef as she attempts (and comes very close) to seducing him.

Clothes themselves originated in the aftermath of the sin of man's disobedience to G-d in Gan Eden. Before man’s sin, the physical and the spiritual world existed in harmony. There was no need to cover up one’s body. It is only as a consequence of using our physical body for sin that we were instructed to cover much of it with clothes[2].

If clothes are the outgrowth of sin, they must also serve as a vehicle for teshuva, a return to man's original state of purity. Our Sages saw each of the eight garments that adorned the high priest as facilitating atonement for particular sins (Erchin 16a). For example, the tzitz, the plate of gold the Kohen Gadol attached to his turban, atoned for the sin of arrogance. The kohen gadol was enjoined from raising his hands above the tzitz, a constant reminder that he must be subservient to G-d. The michnasaim, pants, worn by the Kohen Gadol atoned for sins of sexual immorality. Coming to the Temple and reflecting on the elegant clothes of the priests was a means to moral improvement.

The first piece of clothing mentioned is that of the choshen, the breastplate, worn by the high priest. Our Sages state that the choshen had the ability to atone for the sin of miscarriage of justice; it is referred to in the Biblical text as the choshen hamishpat, the breastplate of justice. The path to G-d begins with ensuring monetary justice for all. Contained within the breastplate were the Urim v’Tumim, literally “the lights and perfection”, whereby G-d "communicated" to the high priest regarding issues of national importance. In other words, G-d's relationship to the people of Israel is predicated upon our monetary integrity.

Not by chance did Rav Yosef Karo—author of the standard code of Jewish law, the Shulchan Aruch—codify the vast corpus of monetary law in the section entitled Choshen Mishpat. Many of the commentaries on the Shulchan Aruch took their titles from the description of the choshen hamishpat, classic rabbinic works such as the K’toz Hachoshen, the Avnei Milueem and the Urim V’tumim. The centerpiece of the choshen hamishpat is the four rows of stone, the arba turim, the name of the great code of law by Rav Yaakov ben Asher, on which Rav Yosef Karo based his Shulchan Aruch.

The Torah makes mention of the choshen hamishpat even before it describes the ephod that served as an atonement for idolatry, specifically for the sin of the golden calf. G-d can and does forgive idolatry, but He is much less forgiving when one takes monetary advantage of another. G-d is effectively "unable" to forgive sins inflicted upon our fellow man, a notion reflected in the fact that our teshuva on Yom Kippur is meaningless if we continue to sin against our fellow man.

Clothes may reflect our values and beliefs, but they are only a means to an end. In order to ensure that our clothes are "for splendour and beauty", we must see beyond the clothes in order to come closer to G-d and our fellow man.

[1] It is likely for this reason that on every Yom Tov and Rosh Chodesh, one of the sacrifices offered is a chatat, a sin offering of a se’ir izzim. With the holidays being zecher l’yetziat mitzraim, we must remember the sin of the Jewish people that led to our exile in Egypt.

[2] Clothes are removed permanently upon death. Tearing keriah is much more than a sign of mourning. Ripping our clothes represents the return of our souls to our Maker in a pure state. The lifelong tension between the physical and spiritual has come to an end; the soul is now under the sheltering wing of G-d.