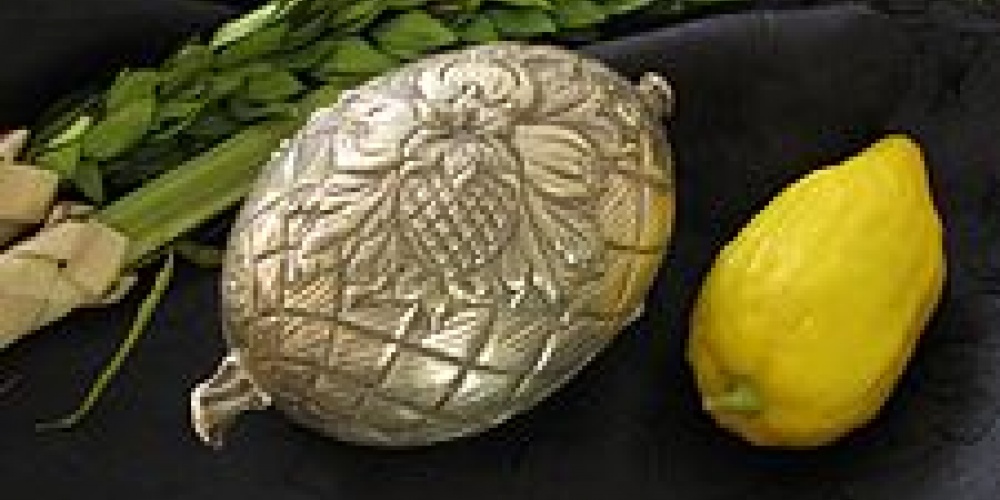 "And you shall take for yourself on the first day a beautiful fruit of the tree, an unopened palm frond, myrtle branches, and willows and you shall rejoice before G-d for seven days" (Vayikra 23:40). The halacha stipulates a number of ways to fulfill the mitzva of rejoicing (simcha); eating meat, drinking wine, buying new clothes, learning Torah, sharing our blessings with others. Yet ultimately, simcha is achieved through feeling the presence of G-d: "and you shall rejoice lifnei Hashem, before G-d".

This presence is felt, first and foremost, in the Temple. Thus, according to the rabbinic understanding of the above verse, the command to take the arba minim--while operative outside of the Temple "on the first day" only--applied for all seven "before G-d", i.e., in the Temple.

Five days earlier, on Yom Kippur, is the day when "before G-d, you shall purify yourself"; and it was the service in the Temple, specifically the sair leAzazel, that was the means of atonement. The purity of being before G-d on Yom Kippur leads to the joy of being "before G-d" on Sukkot.

With the Temple destroyed, our ability to feel the presence of G-d--and hence, our joy--was diminished. Some rabbis suggested that we were never to enjoy meat again, and some went so far as to recommend we stop having children; i.e., that we should self-destruct (see Bava Batra 60b). Yet ultimately, our tradition understood that the Temple was only a means to an end. Rav Yochanan ben Zackai, when given the chance, did not even try to save the Temple. Instead, he asked for permission to set up an academy in the small coastal town of Yavne. The terrible infighting amongst the Jews, the corruption that reached even the high priesthood and the Temple (see, for example, Mishna Yoma, chapter 1) meant that Judaism needed restructuring, with a focus away from the centrality of the Temple. (In fact, those groups that continued to focus on the Temple were lost to Jewish history.)

Rav Yochanan ben Zackai understood that mourning for the Temple, while necessary in some form, could not impede the development of Judaism. He thus instituted a series of laws; not to mourn, but to remember and celebrate the practices of the Temple. If the lulav was taken for seven days in the Temple, now that there was no Temple, it should be taken for seven days throughout the Diaspora. In a stroke of genius, Rav Yochanan ben Zackai taught that the joy that was present in the Temple could and would be found everywhere; we were to feel the presence of G-d in our miniature temples, the batei knesset, on the farm and in our home.

As Rav Yochanan ben Zackai did for Sukkot, Rabbi Akiva did for Yom Kippur. In addition to their mourning the destruction of the Temple, the Jewish people feared that that without the elaborate Temple ritual of Yom Kippur, atonement was impossible. Yet Rabbi Akiva, like Rav Yochanan ben Zackai before him, taught that it is not the sticks and stones of the Temple, but rather our relationship with G-d that matters most. And for that, no temples are necessary.

"Rabbi Akiva said: Blessed are you, Israel; before Whom do you become pure? Who purifies you? Your Father in Heaven!...and it says Mikveh Yisroel; just as a mikveh purifies the impure, so, too, the Holy One, Blessed be He, purifies the Jewish people" (Yoma 85a). If we immerse ourselves in carrying out G-d's will, atonement will follow, with or without a Temple. What a powerful message to the generation that witnessed the destruction!

Let us follow their example. May the purity of Yom Kippur, attained through fasting and prayer, lead to the joy of Sukkot, attained through feasting. Even as we leave the comfort of our homes, let us rejoice in the presence of G-d.