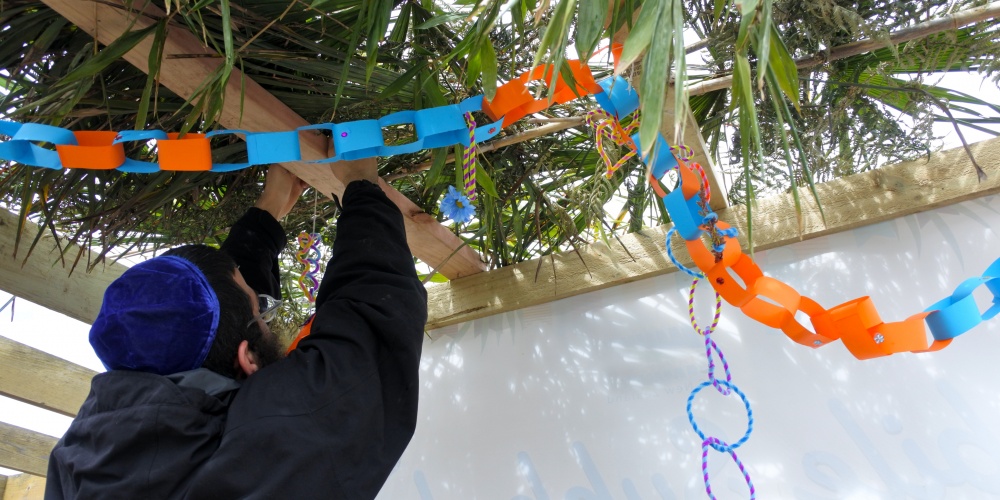 “A sukkah that is taller than 20 amot, cubits (approximately 30 feet), is invalid; and Rabbi Yehuda validates it” (Sukkah 2a). This rather technical detail—one that has little practical relevance—seems an odd law with which to start masechet Sukkah. Yet this simple law contains within it the essence of the holiday of Sukkot.

In explaining the view of the Sages, the Gemara offers three different, yet ultimately complementary reasons for this law. Rabba, a third-generation Babylonian amora, explains that if one sits in a structure higher than 20 amot, one might not realize that one is sitting in a sukkah. While many mitzvot can be fulfilled even absent kavana, proper intent, regarding dwelling in a sukkah, the Torah makes clear that we are to sit in a sukkah “lema’an, so that the generations will know that it was through sukkot that G-d redeemed us from Egypt” (Vayikra 23:43). If one is not cognizant of the s’chach, one cannot fulfil the mitzvah of sukkah[1].

Rav Zeirah’s concern is rather different. A sukkah must offer protection from the sun, so that there is more shade than sunlight. Yet that is not enough. The shade must come (at least in theory[2]) from the s’chach itself—a sukkah is defined by the s’chach—and if the sukkah were to be taller than 20 amot, the shade would be coming from the walls of the sukkah.

Rava offers a third explanation, based on the fact that the sukkah is meant to be a temporary dwelling place. A structure that is more than 20 amot tall must, by definition, be a permanent structure.

Putting this all together, the rule that the sukkah may not be more than 20 amot tall contains some of the most fundamental teachings of Judaism.

We must know that there is a G-d of history, who took us out of Egypt. Internalizing why we sit in a sukkah is nothing less than a fulfilment of the first of the aseret hadibrot, “I am the Lord who removed you from Egypt”. Judaism sees little value in knowledge unless it is put into practice. To intellectually know G-d took us from Egypt means little if we do not demonstrate that knowledge. While we may relive the Exodus at the Pesach seder, the Torah stresses the link between a sukkah and the Exodus. Having a beautiful meal with four cups of wine in the spirit of royalty is nice, but leaving our home and exposing ourselves to the elements demonstrates our belief on a whole other level. Is it any wonder that while the vast majority of Jews attend a Pesach seder—even many otherwise assimilated Jews—only the observant, a distinct minority of the Jewish people, dwell in a sukkah[3]?

Yet it is not enough to sit in a sukkah; one must know why one is sitting in a sukkah. Judaism is about doing mitzvot, but mitzvot are only meaningful if we understand and appreciate them. Rote performance is often no performance at all.

We live in a society where we like to be in control. Covid has taught us that the best of plans can be rendered futile in a minute. There is only One who can offer complete protection. It is our flimsy sukkah that “shall be for shade from heat by day and as a shelter for protection against drenching rain” (Yishayahu 4:6). Of course, in reality, a sukkah the roof of which protects us fully from the rain is invalid. But while the sukkah offers only limited physical protection, it offers much in the way of spiritual opportunities. Sitting in the shade of the s’chach, we are reminded that G-d watches over us, even if it may not always seem that way.

Perhaps here, too, there is a linkage to the Exodus. The shade from the s’chach must cover an area greater than does the sunlight. One of the primary Egyptian gods was the sun god known as Ra. Amongst other goals, the plague of darkness was a demonstration that the god Ra was no match for G-d of the heavens and the earth. The sukkah reminds us of the One G-d who controls the world.

Continuing along these lines, Rava’s explanation of this law, that a sukkah must not be a permanent structure reminds us of the fleeting nature of life. As much as we often like to pretend otherwise, life is not permanent. While it is not healthy to constantly think of death, neither should we remove it from our consciousness. It is only the realization that we will someday die that encourages us to live a meaningful life, to try to correct our mistakes and leave—as the only permanent marker of our life—a positive legacy and example for others. “Repent one day before you die”. Life is short and we must make the most of every day, a most apt message in the days following Yom Kippur.

Yet there is a fourth reason that a sukkah taller than 20 amot is invalid. And that reason of ‘we do not know’. In discussing exceptions to the ruling of the Mishna, the Gemara explains that according to the view of Rabba, the Sages and Rabbi Yehuda disagree only if the walls of this sukkah do not reach the s’chach, the roof. But should the walls go all the way to the top of the sukkah, even the Sages would agree such a sukkah would be kosher. In such a scenario, one is likely to follow the height of the walls to the roof and hence know that one is sitting in a sukkah.

The Gemara further notes that, according to Rav Zeira, Rav Yehuda and the Sages argue only assuming the rare scenario that the sukkah is exactly four by four amot. But as the sukkah gets wider and or longer, the roof area increases and hence, even the Sages would agree that the sukkah can be more than 20 amot tall.

The Gemara follows by wondering which explanation of the Mishna could help us understand the view of Rav Chana bar Rava in the name of Rav, that Rav Yehuda and the Sages argue only in the even rarer case that the sukkah is so small that only one’s head, most of one’s body and a tiny table can squeeze into the sukkah. Should the sukkah be any larger, the Sages would agree, and even a taller sukkah would be valid. The Gemara notes that this view cannot be reconciled with any of the views we have learned. Rashi, in a rather startling comment, explains that according to this view, we have no idea why a sukkah should be invalid at 20 amot. Yet this view in not rejected, and the Tosafists do provide a possible explanation.

Not knowing is one of the most important lessons of Sukkot, and of life in general. The sukkah teaches us that we have no idea what will be in life. We can plan and plan but we cannot control whether our plans will come to fruition.

These past 17 months (at least here in Ontario) have been months of not knowing what will be. It has afforded us the opportunity to focus on what is really important in life. We have become much more aware of how temporary life is and how uncertain we must always be. Hopefully, we have gained the knowledge that it is G-d who is our ultimate protector and redeemer—if not in a physical sense, then at least spiritually.

[1] The Tur (Orach Chaim 625) takes this a step further, ruling that in addition to knowing that one is sitting in a sukkah, one must know why one is sitting in a sukkah. Thus the debate as to the reason we sit in a sukkah—either because the Jewish people dwelled in actual sukkot in the desert, or that they are representative of the clouds of glory through which G-d protected the people in their sojourn in the desert—is not just a matter of history or discussion, but of legal import. The Tur (as understood by the Bach ibid) rules that the usage of the word lema’an, for the sake of, teaches that in order to properly fulfil the mitzvah of dwelling in a sukkah, one must be cognizant of the fact that the sukkah represents the clouds of glory.

[2] Hence, one can build a sukkah in a valley despite the fact that shade may come from the mountains above. If one were to move the sukkah elsewhere, it would come from the roof—but a tall sukkah cannot (even in theory) generate shade from the s’chach.

[3] Rav Soloveitchik insisted on keeping the Maimonides School open on chol hamoed Sukkot (but not chol hamoed Pesach) so that many of the students could enjoy their only opportunity to eat in a sukkah. As one who teaches at a community high school I can verify that, despite the growth of Orthodoxy, very little has changed in the general Jewish community.