Some Thoughts on Yom Yerushalayim 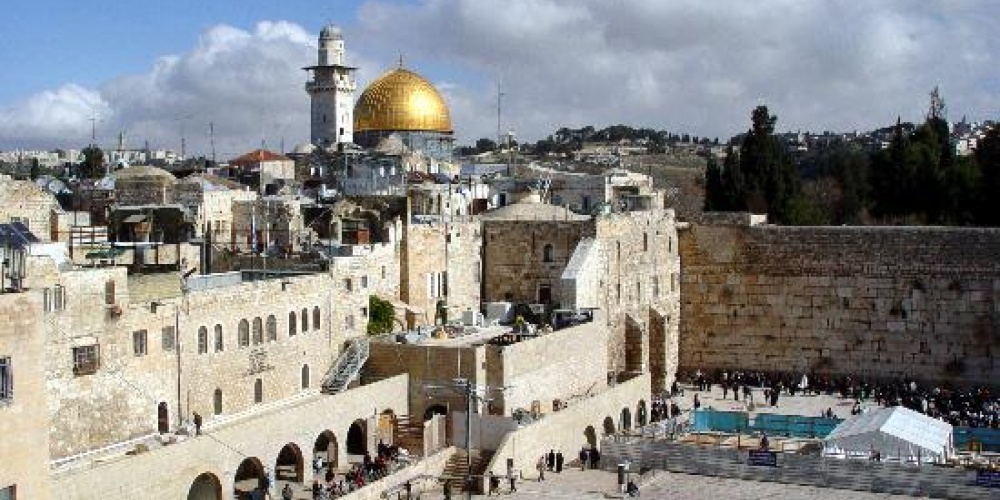 "There are ten [levels of] holiness; the land of Israel is holier than all other countries, and what is its holiness? That we bring from it the omer offering, the bikkurim [fruit] and the two loaves of bread" (Mishnah Kelim 1:6). The omer allows a person to enjoy his crops, the bikkurim, his fruit; and the two loaves of bread allow new produce to be used in the Temple rituals. Holiness, first and foremost, is equated with enjoying the fruits of one's labour.

Missing from the list is any reference to animal sacrifices, as they may be brought from anywhere. Apparently, the holiness of the land is connected to that which grows from the land, not that which eats the produce of that land. It is production, not consumption, that emanates holiness.

The omer and loaves of bread link the holidays of Pesach and Shavuot; the omer sacrifice marks the first of day of the omer, and the two loaves of bread are brought on the 50th (and last) day of the omer period. The bikkurim solidify this link, with the first day to bring the bikkurim being Shavuot. As he gives the fruit to the kohen, the farmer gives a synopsis of Jewish history, focusing on the Exodus and the arrival of the Jewish people in the land of Israel. This synopsis serves as the primary text and basis of the maggid section at the seder.

The Torah specifically commands regarding the bikkurim that the farmer "shall rejoice with all the good that G-d has given you and your household; you, the Levite, and the stranger in your midst" (26:11). Coming to the Temple, sharing, eating and celebrating are further marks of holiness.

But the bringing of the omer, two loaves of bread, and the bikkurim are only the first of ten levels of holiness. The next level is the walled cities, from which those afflcited with tzara'at are sent, and where the dead are not to be buried. Holiness is associated with life; death is defiling. Sin--and tzara'at  is in the view of our Sages punishment for speaking negatively about others--is a distortion of our life's mission, and hence, a diminution of holiness. The third level of holiness is Jerusalem. The Mishnah refers to Jerusalem not by its name, but as "inside the walls". Walls--especially in the ancient world--serve as a means of protection, keeping out the undesirables. While all Jews are mandated to strive for kedusha, one must be well aware of the limits of one's holiness. To try and achieve more than one is capable of doing will just drive us away from holiness.

As the Mishnah lists higher and higher levels of holiness, there is an ever-expanding list of those who are forbidden to enter these holy places. New mothers, non-Jews, non-kohanim--the list culminates with the Holy of Holies, where "no one may enter, save for the high priest on Yom Kippur during the time of the service". The quest for holiness is the quest for closeness to G-d. As the Torah defines simcha, joy, as being in the Divine presence (see Vayikra 23:40), holiness and happiness are really one and the same. And that holiness and happiness are most manifest in Jerusalem, the resting place of the Divine presence.

Unlike the rest of the country, Jerusalem was not divided amongst the tribes. Jerusalem belongs to no one and everyone, and it is the city that is meant to unite all. Based on this principle, the Talmud (Yoma 12a) goes so far as to say that, "one may not rent out homes in Jerusalem, as it is not theirs: Rav Elazar says, not even beds" (try telling that to the hotel industry!).

Unfortunately Jerusalem is too often a focus of controversy, both internal and external. The Talmud (Eiruvin 6b) teaches us that, "Jerusalem, if not for the fact that its gates were closed at night, would be considered a public domain".  Jerusalem is meant for all members of the public. However, if one does not exude holiness and happiness, if one does not see Jerusalem as the city "that joins [people] together" (Tehillim 122:3), then gates become necessary.

May we merit a Jerusalem that needs no walls of protection, serving as the city of peace.