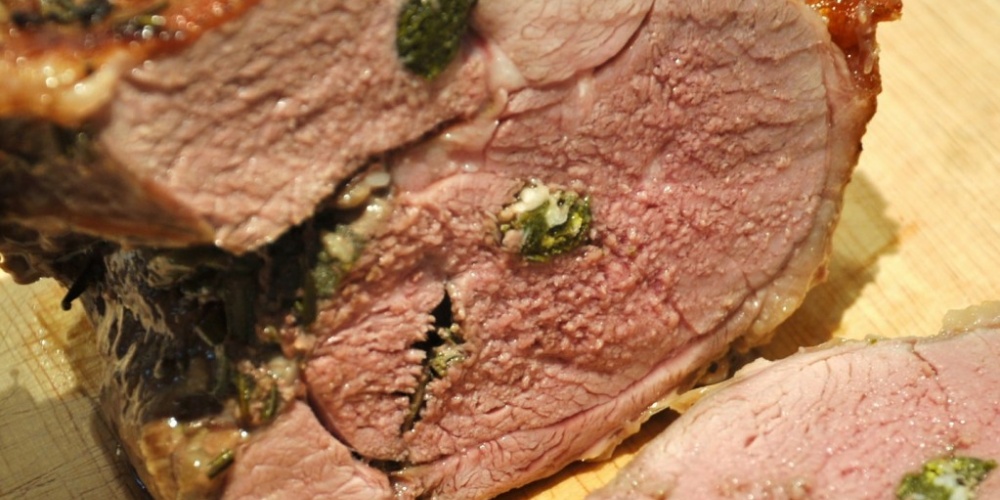 With the destruction of the Temple, the focus of the seder menu shifted from the eating of the korban pesach to the eating of matza. The importance of eating the korban pesach is such that it carries the punishment of karet, excision, for those who neglect it (along with only one other positive mitzva, that of brit milah). The original paschal lamb was what allowed the Exodus to occur. It marked the first time the Jewish people (who had been slaves days earlier) publicly demonstrated their belief in the G-d of Abraham, Isaac, and Jacob, and not the gods of Egypt. They threw off the shackles of man, replacing them with service of G-d. It was this demonstration that set the groundwork for their proclamation of na’aseh v’nishma seven weeks later at Sinai.

Alas, it has been close to 2,000 years since we were able to bring the paschal offering. Instead of a dessert consisting of barbequed lamb chops, we end the seder with a lowly piece of matza.

“Upon matza and bitter herbs you shall eat it [the paschal lamb]” (Bamidbar 9:11). The Torah commands that we eat three biblical foods—pesach, matza and marror—on Pesach night. And they are meant to be eaten together; so much so that, when no pesach is brought, the nature of the mitzva to eat matza and marror is transformed. With no other source to mandate its eating, and with the verse linking it to the korban pesach, the Talmud declares that nowadays, the eating of marror is in fact only a rabbinic command (Pesachim 120a).

The korban pesach represents freedom on its highest level: the ability to defy oppressors and join together to form a new nation. Marror is the exact opposite, serving to remind us of our total subjugation to the whims of a cruel oppressor. Jewish history has had its share of both pesach and marror, of great freedom and horrific oppression. To commemorate one without the other would be a distortion of what it means to be Jew. Hence, if there is no korban pesach, there can be no mitzva to eat marror—at least, biblically. Yet our Sages—living after the destruction of the Temple, and intuiting a long and bitter exile ahead—instructed us to continue to eat marror, the bitter herbs of our loss of freedom. At the same time, they forbade us from eating anything that would mimic the korban pesach; such would have to await our return to the land[1].

Matza, too, would also be required only on a rabbinic level—if not for the fact that the obligation to eat such also derives from a second verse, “in the evening you shall eat matzot” (Shemot 12:18). Matza represents both exile and freedom; cheap to make and easy to store, it is the “perfect” food to give a slave—“this is the bread of affliction our ancestors ate in Egypt”. Yet at the same time, it is the symbol of our freedom and quick escape from Egypt: “And they baked unleavened cakes of the dough which they brought forth out of Egypt, for it was not leavened; because they were thrust out of Egypt, and could not tarry” (Shemot 12:39). The simple piece of matza reminds us of both of highs and lows of Jewish history—at times, we focused on the bread of affliction we were eating; and at others, on the fact that we were redeemed from Egypt.

While there are many challenges facing the Jewish people, we are living at the best and safest time to be a Jew since antiquity (and maybe in all of history). Matza remains the only food we are obligated to eat at the seder, as we look forward to the day when we will eat the korban pesach and the marror will be but a distant memory.

[1] In the 19th century, as Jews returned home, there was very serious rabbinic discussion on the feasibility of bringing a korban pesach, even absent a Temple. Rav Yakov Ettlinger, the leading rabbinic figure in Germany and teacher of Rabbi Shimshon Raphael Hirsch, named his response Binyan Tzion, the building of Zion; and he opens with a long responsum on this exact issue.