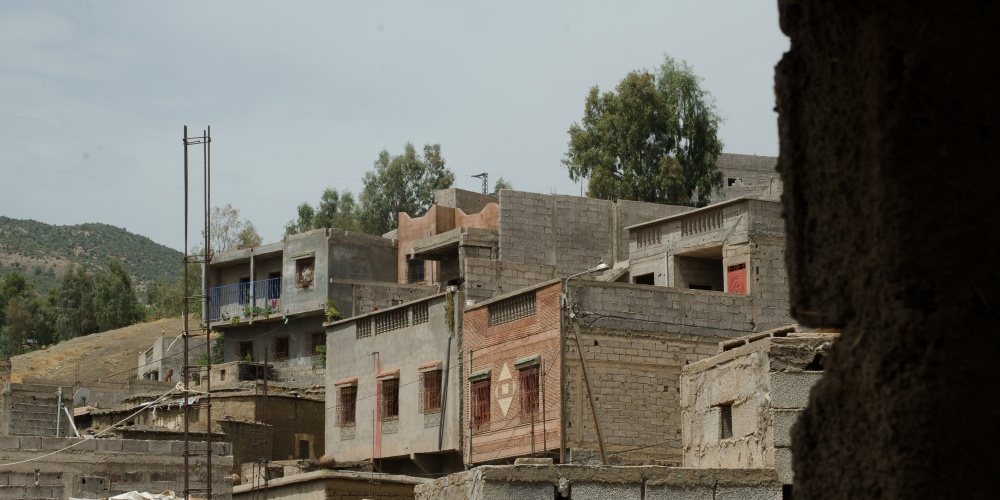 “Eizo asheer? Hasameach bechelko, Who is wealthy? One who is happy with his lot”. It is often hard for many of us raised in the affluence of the West to appreciate the beauty of a simple way of life, devoid of all the modern conveniences we take for granted—and can't live without. A visit to a Berber village can help with some perspective.

The indigenous Jews of Morocco, known as the toshavim, residents, originally came to Morocco some 2,000 years ago—perhaps as early as the aftermath of the destruction of the first Temple. They were joined after 1492 by the megurashim, the (Spanish) exiles, whose practices often differed from the toshavim—and this often led to separate shuls being set up for each. The power of the Jews of Spain—a community that may have represented some 90% of world Jewry—was such that more often than not it was their practices that became the norm. Of course, influences work both ways with the megurashim picking up many of the traditions and folk-ways of the toshavim.

Many of the toshavim lived in small Berber villages. The Berbers, the indigenous people of Morocco, number some 30 million people today, living mainly throughout North Africa. Most are Sunni Moslems, descendants of those who converted to Islam in the 9th century and lived in peace and friendship with their Jewish neighbours. The Jews lived a simple life.

Visiting one such village today, and spending time in the home of a Berber family (who purchased their home from a Jewish family leaving for Israel), it is hard for us to imagine that people in the 21st century actually live in such homes. The animals—cows, sheep, rabbits—take up the bottom floor with the family living upstairs in, shall we say, very basic conditions.

Yet I have little doubt that many would not trade their neighbourhood for ours. The village was in the beautiful and refreshing Atlas Mountains. Freed from many of the stresses of modern living they appeared quite happy. Our Sages insightfully understood that “Whoever has one hundred wants two hundred”. And with so many today having hundreds of thousands, millions, and even billions, is it any wonder so many people are unhappy with their lot? While such a lifestyle cannot work in the West, perhaps there is value in living somewhere where one does not even have one hundred. And it seems that life expectancy in these areas is not too shabby. Our host’s father lived to be 120 (and even if he is exaggerating that is not bad).

Not coincidentally, Moroccan Jews were infused with an emunah peshuta, a simple but unshakeable faith. They tenaciously preserved their traditions, greatly revered their rabbis—often in death more than in life, believing in the power of great tzadikim, even after they have long departed the world (much like the Chassidic world of today).

When representatives of the State of Israel came to encourage these village Jews, as well as those in urban areas, to emigrate to the new State—and by 1948 there were some 175,000 Jews living in hundreds of villages—the vast majority were all too eager to do so. They were brought up with the notion that they were just temporary residents, even if temporary meant 2,000 years—and took the prayer “next year in Jerusalem” seriously.

So beloved were the Jews of Morocco that oftentimes their neighbours were saddened that they were leaving and wondered why. Such an attitude went up all the way to the King such that when Rabbi Shalom Messas, Chief Rabbi of Morocco and later Chief Rabbi of Jerusalem, emigrated to Israel in 1978, King Hassan ll escorted him to the airport and asked the rabbi to bless him as he left.

Sadly, the mass immigration led to one of the tragic stories of Zionism and the creation of the State (the beginning of the flowering of our redemption) but it is a story that must be told. One such story is that of the family of our local tour guide, Raphy Elmaleh.

Raphy’s five older brothers went to Israel on aliyat noar—before he was even born. It was not until the age of 15 that he met them, by going on a mission to Israel to find them. Even his parents did not know how to contact them as they were purposely cut off from their families as part of the Zionist plan to create a new Jew, one far removed from the “primitive, uneducated and religious” Jew that they thought of when they thought of Moroccan Jewry. Raphy’s father went to see his children—after a 20-year absence—and when seeing the tattoo on one son and two others smoking on Shabbat he swore to never to go back to Israel as he lamented “for this I send you to Israel”.  He never broke that promise. Of Raphy’s ten brothers living in Israel, seven are in his words “totally not religious” though the other three are shomer Torah and mitzvoth.

Of course, not all who would have – or actually did – remain in Morocco would have remained observant. The seeds of secularization had already begun and were making inroads.

While less tragic, but no less threatening to the preservation of the Moroccan way of life, customs and halachic traditions—one with many differences from, but no less, (actually likely more), authentic[1] than the modern day Ashkenazic tradition—was the “Ashkenzation” of those who remained observant and/or learned in yeshivot. Their minhagim were ignored, the sheilot and teshuvot of their rabbis collected dust, their mode of dress “corrected”, as they were taught the “proper path” of Torah.

Thankfully, the last few decades have witnessed much scholarly interest in this great and important tradition and those of Moroccan descent are claiming back their heritage. Recent years have seen many rabbis of Moroccan origin occupy prominent positions, including the past Chief Rabbi of Israel, Rabbi Shlomo Amar who was born in Casablanca in 1948 and moved to Israel as a teen-ager.

The wide-spread celebration in Israel of the festival of Mimouna, beginning immediately as Pesach comes to a close, is another indication of the Moroccan traditions spreading even beyond Jews of Moroccan descent. Employers are even required to give those employees who wish to celebrate time off from work.

[1] I say this because much of the development of Ashkenazic halachic tradition since emancipation and the enlightenment has been reactionary, to modernity itself and to the innovations of Reform and later, Conservative Judaism. There is hardly a greater innovation in Judaism over the past 200 years than the claim that “all innovations are forbidden by the Torah”. The Moroccan approach to halacha was able to develop and flourish naturally. Thus a psak such as that given by Rabbi Soloveitchik that he cannot allow a Rabbi visiting Russia in the 1970’s to take a taxi driven by a non-Jew to shul on Shabbat because of the “Conservatives” would be incomprehensible in Morocco. There is much more to say on this topic “but this is not the place”.