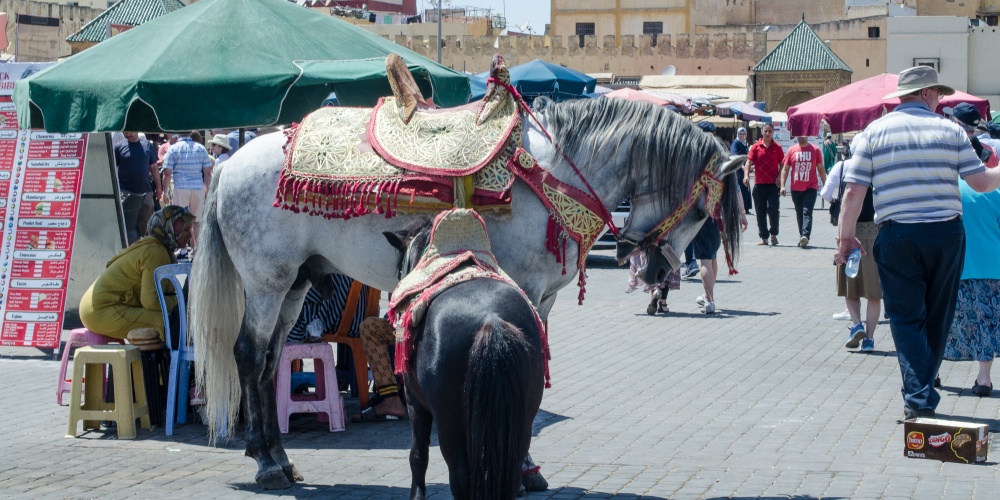 “With fidelity to its irreversible choice to construct a democratic State of Law, the Kingdom of Morocco…having as its bases the principles of participation, of pluralism and of good governance. It develops a society of solidarity where all enjoy security, liberty, equality of opportunities, of respect for their dignity and for social justice…

A sovereign Muslim State…the Kingdom of Morocco intends to preserve, in its plentitude and its diversity, its one and indivisible national identity. Its unity, is forged by the convergence of its Arab-Islamist, Berber [amazighe] and Saharan-Hassanic [saharo-hassanie] components, nourished and enriched by its African, Andalusian, Hebraic and Mediterranean influences [affluents]. “

So begins the Constitution of Morocco, a country where Jews have lived for some 2,000 years. It is a rare Arab county where Jews are granted equal rights, have Jewish schools funded by the government and can openly practice their religion. The King, Mohammed V1 maintains a Jewish advisor and is openly friendly to his Jewish citizens and (secretly) friendly with the State of Israel. Despite the fact that there are no official diplomatic relations, Israelis using their Israeli passports are welcomed here and come in relatively large numbers.

This is a community, which in 1948 numbered some 300,000 Jews, yet today has less than 1% of that number. However, unlike other Arab countries, the Jews were not expelled after the creation of the State of Israel, and the decline of the community took place over many years with Israel greatly (successfully) encouraging immigration to the new State. On the eve of the six-day day war some 60,000 Jews remained in the country. It was only after the war that many of the remaining Jews felt unsafe and not surprisingly much of this later wave of emigration was to countries outside of Israel. But thankfully, Jews today are made to feel most comfortable.

Approximately 1,600 of the 2,500 Jews remaining in Morocco live in Casablanca, the economic capital of Morocco with a population of some 8 million people - more than 20% of the population of Morocco.  One would think that the Jewish infrastructure would be next to non-existent. Thus when I walked into shul for mincha-maariv, I was pleasantly surprised to be able to join some 25 or so locals for tefillah. Moreover, as we walked into the shul courtyard we met a young man holding an ArtScroll Gemara coming to learn with his chavruta. He told me that he wouldn’t be joining us for minyan as he gives a shiur between mincha and maariv at another shul. I was impressed.

But when I discovered that there are 22 functioning shuls, including 7 on one street – many on a daily basis and each and every one on Shabbat - I nearly fell off my chair - I did not because I was standing at the time. This shul, Neve Shalom, had two minyanim the next morning, attended by approximately 50 people.

Despite the great upheavals in over the past 70 years Jews here – as in many non-Ashkenazic communities[1] - see shul as part and parcel of their daily routine. It is beautiful to have the opportunity to daven with those whose minhagim are different than one’s own – something I almost never think to do when in Toronto. The “tunes” are different, the chanting of every word out loud something unheard of in my shul, the lengthy davening (Shacharit took over an hour - imagine trying that at your typical Ashkenazic shul), the interaction between kahal and chazzan fascinating. Yet the similarities and comfort one feels davening with Jews half way around the world, living in a very different cultural milieu, even with a language barrier with many, is one of the things that makes Judaism so special.

The seriousness of their davening (there is no need to ask people to be quiet during davening) is reflected in other areas. Public chilul Shabbat is almost non-existent, kashrut is the norm and Jewish education is accessible and taken advantage of by all. Some 600 Jewish children attend five Jewish schools in Casablanca.

But this is not a growing community, and the future is uncertain at best. Very few of the young people stay in Morocco, seeing no future here for themselves. Typical was the young couple we met at one of the “Jewish clubs” in the city, a beautiful recreational oasis where Jews gather for recreation, social activity and great food.  She was raised in Morocco yet after high school came to Stern College in New York. She and her French husband are in dental school at University of Pennsylvania. Her three siblings have also left Morocco and she was back for a family visit. Her husband noted that he often feels safer in Morocco than in France.

Rafi, our local tour guide, comes from a family of 12 siblings. His mother married at 14, his father 17 and he is the only one of the siblings leaving here. His 10 brothers live in Israel, along with his son and grandson, and his sister in England. He left, vowing never to return, served in the IDF but returned to visit his sick mother. 22 years later he is still here, devoting his life to recovering, preserving and restoring artifacts, shuls, and books that tell the story of glorious community that thrived here for centuries. Over the next week, we look forward to seeing, and learning about part of that story.

[1] While they are often referred to as Sephardim, this reflects an Ashkenazic shall we say elitism, that groups all non-European Jews in one broad brush. Iraqi, Yemenite, Moroccan and Libyan Jews often have practices and mores that differ from one another to a greater degree than those of Askenazim and Sephradim.