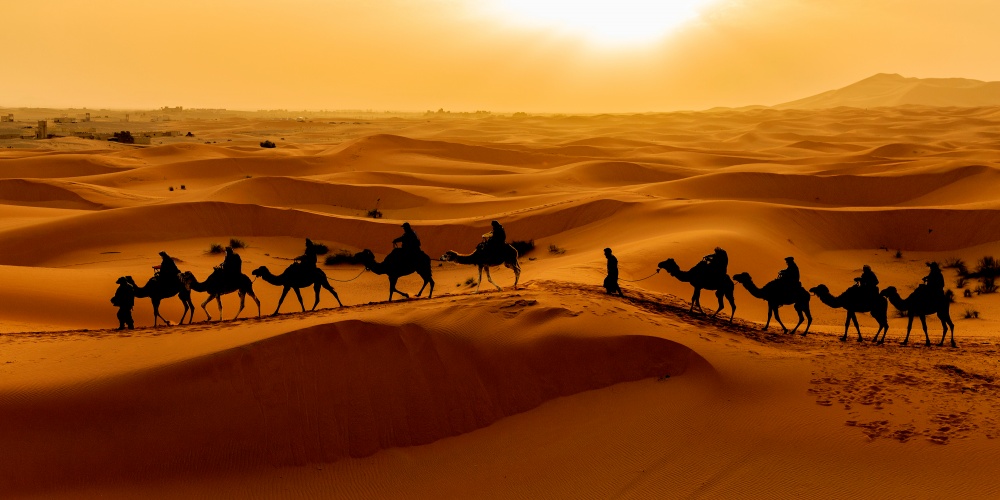 The Torah is full of repetition. Whether it is law or narrative, much of the Torah seems to deal with recurring themes. Our Sages have focused on understanding why this is so and elucidating what each repeated element adds, noting crucial nuances of difference between the recorded accounts.

It is most interesting, and important to analyze which sections of the Torah are repeated and for which sections once is enough. In reading the opening verses of this parshat Massei, one is struck by the seeming superfluousness of it all. The Torah methodically lists the forty-two places, and little else, where the Jewish people camped during their forty-year sojourn in the desert. "They journeyed from here and encamped there" is the refrain that repeats itself over and over.

Clearly the listing is not meant for informational purposes. Such information can be easily gleaned by a reading of Shemot and Bamidbar, notwithstanding the fact that certain places are listed here for the first time. Rather the travelogue seems to serve as a retrospective of their long journey. As the Jewish people finally prepare to enter the Land of Israel, they recount the many places on their long detour, making entry into the Land all that more meaningful.

On three occasions, however, the Torah goes beyond listing the names of places and adds some additional, even if repetitive, information. The most noticeable instance relates to the death of Aharon, presumably because his death actually led to a rerouting of the march in the desert, adding an additional eight stops (Rashi, Bamidbar 26:13).

Much more difficult to decipher is the verse, "They left Marah and came to Elim, and in Elim there were twelve water springs and seventy palms and they encamped there" (Bamidbar 33:9). This verse is little more than a repetition of the one in Exodus (15:27) and left unexplained is why the Torah specifically repeats the number of springs of water and palm trees.

In the course of the actual journey as recorded in sefer Shemot, the Torah records additional details. Prior to Elim, the Jews had encamped at Marah, and had no suitable drinking water. And upon leaving Elim and arriving in the Seen desert the Jewish people complained about the lack of food, leading to the giving of the manna. It was only while camped at Elim that they had ample food and water. Yet in our parsha, neither the lack of food at Seen nor the lack of water at Marah is mentioned; only the abundance of water and food at Elim.

One might argue that the Torah makes mention only of the positive, similar to Moshe Rabbeinu’s omission of the negative report of the spies when he repeats the story (see Devarim 1:22-28). All would have been fine had the Jewish people, instead of complaining, exhibited a little patience and trust in G-d. Yet the Torah does make mention of the lack of water at Refidim some four stops later.

The Torah in our parsha is not digressing in sharing information about the journey forty years past. The mention of the twelve springs of water and seventy date trees is meant as a message to the generation about to enter the land. The number twelve, as Rashi (Shemot 15:27) notes, alludes to the twelve tribes, to the rich diversity of the Jewish nation, each with their own flag yet all marching together. If the number seven represents the cycles of life, Shabbat, shiva, sheva brachot and Sukkot for example, the number seventy represents completeness. Seventy elders represent the nation of Israel and there are seventy nations that emerged from Noach. It is not coincidental that the Babylonian exile from the land of Israel was to be for seventy years.

The numbers twelve and seventy immediately conjure up the image of the first exodus from Israel to Egypt when the twelve sons of Jacob along with their families, a total of 70 souls, were forced from the land of Israel, a land of famine, and headed to Egypt, the land of plenty.

If the exodus from Egypt is to be meaningful and the Jewish people are to successfully set up a State of their own, we need to recognize the diversity and yet maintain the unity of our people. The lulav and etrog (and hadas and arava too) waved on Sukkot – and today the Daf Yomi cycle begins masechet Sukkah - is the symbol of Jewish unity, the festival on which seventy bulls are offered.

This inability to accept, respect and love diversity led to the loss of sovereignty and the loss of our spiritual center 2,000 years ago. Tisha B'Av does not commemorate the historical past but the disheartening present. We have traveled to many places over the years, many more than the forty-two listed in the Torah. If we focus on the twelve wells of water and the seventy palm trees we will merit arriving "el hamencuha v'el hanachala", to the resting place and hereditary land that G-d your Lord is giving us" (Devarim 12:9). May we arrive shortly.