Chanukah: Back to the Future 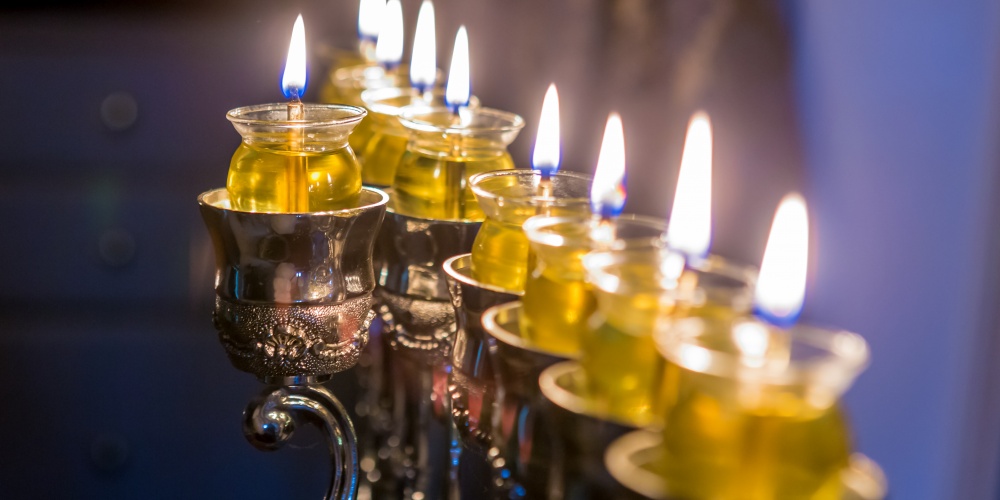 Mai Chanukah? What is Chanukah? the Talmud (Shabbat 21ba) queries, a question we find with respect to no other holiday. The Talmud explains that Chanukah celebrates the miracle of the oil that burned for eight days, allowing the needed time to prepare fresh pure oil. However, in reciting al hanissim during davening and birchat hamazon, the focus is very different. Here the miracle of Chanukah is one in which G-d delivered "the strong in the hands of the weak, the many in the hands of the few". Whereas in the Talmud, the military victory is given scant attention, al hanissim mentions the lighting of the menorah only peripherally, and makes no mention of any miracle with the oil. What, then, is Chanukah celebrating?

Interestingly, the Rambam begins the laws of Chanukah by answering that same Talmudic question and “codifies” the history of Chanukah, a historical overview he gives with no other holiday. The Rambam emphasizes that the military victory enabled Jews to be sovereign in their land for almost 200 years, and this is reason to celebrate. This, despite the fact that the Chasmoneans were kohanim, and as such, were improperly usurping political power from the descendants of the tribe of Yehudah. It is only in the next halacha that the Rambam mentions the miracle of the oil. Apparently, the basis of Chanukah is Jewish nationhood, even if it is "secular" in character, while the details of the festival are derived from the miracle of the oil.

Why can’t our sources agree as to why we celebrate Chanukah?

In prayer, we beseech G-d for the basic practical necessities of life: wisdom, forgiveness, health, wealth, justice and peace. During davening, we must emphasize the miracle of the military victory. Had the Chasmoneans lost the war, we would not be here, celebrating. Judaism, like so many other ancient religions, would have been absorbed by the dominant culture. The military victory is the appropriate focus when we daven.

However, when we study history, we must focus on the purpose of the victory, on its eternal message, recognizing that the military victory was a means to an end. One must fight for a noble cause. In the case of Chanukah, we focus on that flicker of light that can dispel so much darkness, the light that can inspire others. It is no coincidence that Yishayahu’s vision of, “And they shall beat their swords into plowshares and their spears into pruning hooks: nation shall not take up sword against nation; they shall never again know war” (Yeshayahu 2:4-5) is immediately followed by, “O House of Jacob! Come, let us walk by the light of the Lord”. The darkness of war must be replaced by the light of the Lord, the Torah Or, the light of Torah.

Chanukah is a time to celebrate our spiritual continuity, as we continuously strive to attain higher levels of holiness, ma'alim bakodesh. It is for this reason that the Talmud, written hundreds of years after the actual story took place, focuses not on its cause but its effect. The light of Torah can never be extinguished. Just light it, and there is no telling how long it will last.

These two aspects, the military and the spiritual, while complimentary, co-exist in somewhat of a tension, a tension born out in modern-day Israel and across the Jewish world. Chanukah is probably the most widely celebrated holiday of the year, uniting Jews of all different persuasions. Undoubtedly, some see it as a victory for a small sect of religious Jews, at odds not only with the Hellenists but the majority of the Jewish people, who were willing to abandon much of Jewish faith and practice. They see it as a holiday of rejection of the dominant culture in favour of values derived from our eternal Torah. Others see Chanukah as a celebration of a small nation surrounded by hostile enemies emerging victorious in the battles it is forced to wage. It is a celebration of Jewish nationhood.

Whatever the reason for the festival, be it physical or spiritual, it appears to make little sense to celebrate Chanukah after the destruction of the Temple. To celebrate sovereignty when it no longer exists seems meaningless, and celebrating the rededication of the Bait haMikdash when it is in ruins seems downright silly. The Talmud, quoting Megillat Taanit, notes that there were many festivals established during Temple times and all, with the exception of Purim and Chanukah, were quite logically discontinued with the destruction of the Temple.

Why was Chanukah retained?

The continued celebration of Chanukah has little to do with the past and everything to do with the future. After describing the miracle of the oil, the Gemara notes that leshannah acheret, for another year, it was established as a Yom Tov through Hallel, songs of praise, and hoda'ah, thanksgiving. Chanukah was established for a later year, for the Jewish future. Hence, the second blessing we say each night as we light the chanukiah: “Who has wrought miracles for our fathers in those days, in our times”. Chanukah is the holiday celebrating hope over despair, winter turning to spring, darkness to light, exile to redemption. It is the holiday of hope, of Hatikva.

The miracle of the re-establishment of Jewish sovereignty after 1,900 years is reason enough for a holiday. But such a holiday, wonderful as it is, is only the first step. It is the Menorah that is the symbol of the State of Israel. May we merit that leshana acheret, a future year be leshana haba, next year, and that the light of the Temple menorah will bring much light, glowing more brightly each and every day.