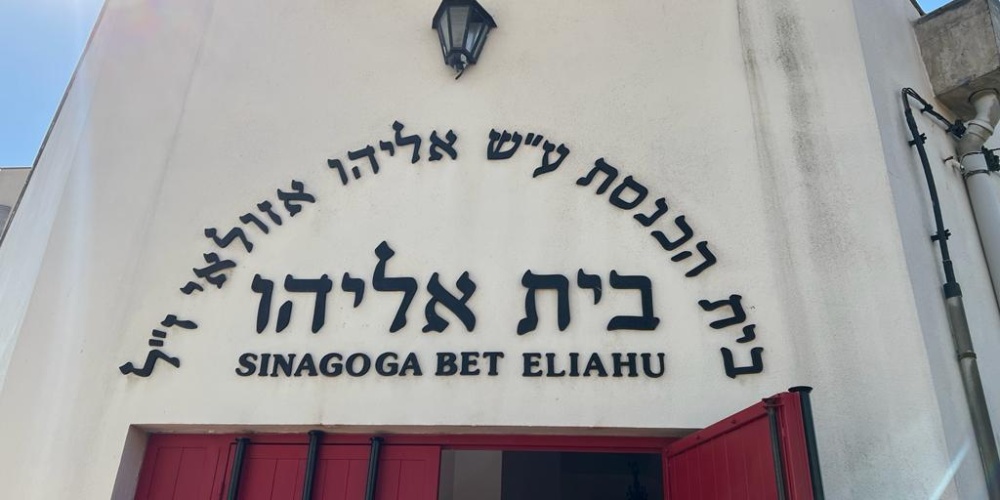 The ancient town of Belmonte is nestled in the mountains of Portugal, with breathtaking views and beautifully cobblestoned streets steeped in history. But we did not visit Belmonte for its picturesque historic beauty – though had we done so, dayeinu. Rather, we came to see the amazing story of the Jews of Belmonte. With the forced conversions of 1497, Judaism had to go underground – something it did for hundreds of years in Belmonte.

This is contrast to the Spanish experience. While some Spanish conversos did eventually leave Spain – causing much tension in places like Amsterdam when they wanted to return to the Jewish community – most eventually assimilated such that millions of Spaniards today descend from Jews. Likely due to the fact that Jews were initially not allowed to leave Portugal the situation was different.

On April 19, 1506, “worshippers” having claimed to have seen the face of Jesus, encouraged and incited by the priests dragged a new Christian i.e. a Jew from the church and murdered him. Thus begun the only pogrom in Portugal, where the populace went on a killing spree looking for New Christians to kill, they being easy scapegoats for a drought, famine and a raging plague. It took the troops of King Manuel – who had left Lisbon to try to escape that plague – three days to arrive and quell the riot, but not before upwards of 2,000 Jews were killed[1]. In response to the massacre King Manuel had the ringleaders – including the church priest – publicly hung and the representatives of the city of Lisbon expelled from the Council of the Crown, thus bringing an end to the only pogrom to ever occur in Portugal. In the aftermath of the pogrom King Manuel allowed the Jews – who previously had not been allowed - to leave Portugal and many took advantage to flee. But others stayed back.

One of the conversos who had managed to escape even before 1506 was Rabbi Levi Ibn Chaviv, who fled to Salonika and from there to Jerusalem where in 1525 he became chief rabbi. He led the battle against the reinstitution of the original semicha[2] that Rav Yaakov Beirav had begun to institute in Tzfat and which can only be given in the Land of Israel[3]. Amongst those who received semicha was Rav Yosef Karo, who himself had come to Portugal as a child – he was born in Spain in 1488 - before making his way to Turkey and then Tzfat. There is a school of thought that his receiving of semicha was the impetus to the writing of the Shulchan Aruch, serving as the “constitution” of what would be a re-constituted Sanhedrin. Ironically, the major reason for the renewal of semicha was to enable conversos returning to Judaism to receive malkot, 39 lashes, which can only be given by a Sanhedrin of 23, whose members must have the original semicha dating back to Moshe Rabbeinu who conveyed such to Yehoshua. Having violated the most serious sin of avodah zara – albeit under duress – these conversos sought penance by receiving lashes based on the Talmudic teaching that all who violate any of the sins that carry the penalty of karet, excision, can have the penalty removed if they receive lashes.

For hundreds of years the new Christians of Belmonte practiced their secret form of Judaism. Nestled away in the mountains and hard to reach – even today - they were relatively safe from the Inquisition. They married their own, observed Pesach – though two days late so as to avoid arousing suspicion, Purim, Yom Kippur and a variety of other Jewish rituals – often in unique forms. They for example prayed to St. Moses. Their Christian neighbours knew of their distinct way of life but they lived peacefully amongst them professing Christianity in public.

In 1917 Samuel Schwartz a Polish engineer visited the Belmonte area and noticed that some people had what looked like Jewish practices. In 1925 he published The New Christians in Portugal in the 20th Century bringing the world’s attention to this long lost community. But it was not until the 1980’s that the community began the process of transitioning from crypto-Jews to become part of the world-wide Jewish community. This coincided with freedom of religion which was allowed only as Portugal transitioned from dictatorship to democracy in 1974. The Beit Eliahu Synagogue was dedicated in 1996 exactly 500 years after Judaism was officially banned in Portugal. Interestingly, some of the older members of the community do not want to “return” to Judaism, insisting on maintaining their “traditional” practices. But many have returned, with many of those fully observant Jews having made aliyah. While the numbers may be relatively small it is hard to think of a greater ingathering of the exiles than the long-lost community of Belmonte.

In 2019 an eiruv was built in Belmonte. The full-time rabbi, Eliyahu Shaeffer was in Israel during our visit but we did have the privilege meeting members of the community. It is a great privilege to be able to daven in a newly built shul of a newly discovered community dating back to a time when Jews were welcomed with open arms in Portugal.

[1] While exact numbers are hard to come by, it is estimated that during the Crusades of 1096, which had such an impact on the historic psyche of world Jewry and which we will commemorate in our kinnot next week, 3,000-5,000 Jews were massacred.

[2] This semicha must be passed down person to person from Moshe Rabbeinu. We will mourn on Tisha B’Av the Roman attempt to end semicha – and hence the almost complete loss of the ability of the rabbis to interpret the Torah anew and institute new ordinances. The Rambam states that “it appears to me”, that if the great rabbis of the generation agree, semicha can be reconstituted.

[3] With the establishment of the State of Israel, Rav Yehuda Leib Maimon, the first minister of religious affairs of the new State, and a serious Torah scholar (he received semicha from the Aruch Hashulchan) sought to revive the “real” semicha. His monograph, Hitchadshut HaSanhedrin Bzman Hazeh, urged and explained how this can and should be done. In the first shiur I heard from Rav Aharon Lichtenstein zt”l when studying in the Gruss Kollel (we were learning masechet Sanhedrin), Rav Lichtenstein discussed his proposal as he analyzed the definitions and borders of “Eretz Yisrael” for various purposes.