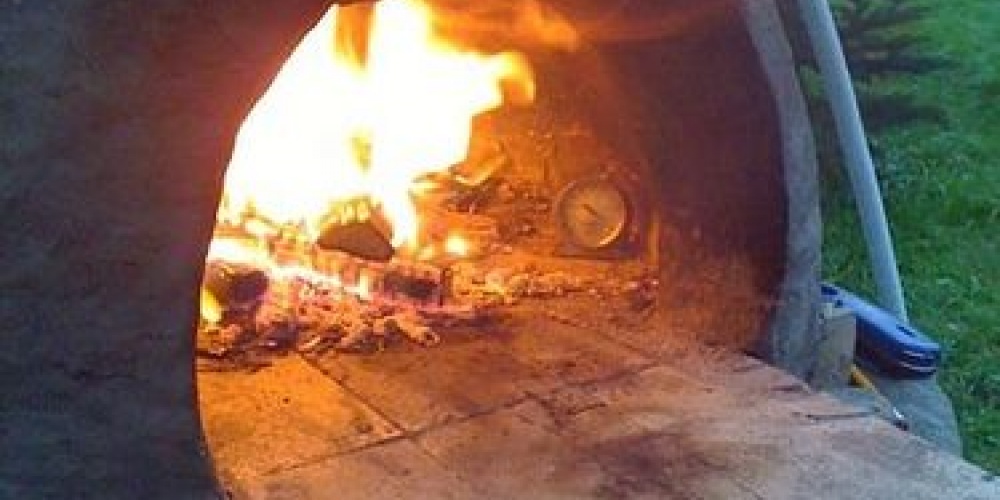 “If an oven is cut into rings, and sand is placed between the rings, Rabbi Eliezer says it is pure. But the sages say it is susceptible to impurity. This is the tanur shel achnai, the oven of Achnai” (Bava Metzia 59b).

It is hard to imagine a more obscure, technical and pretty much irrelevant debate than that of tanur shel achnai. It is a debate of triumph and tragedy; of the responsibility of man to determine the meaning of Torah, and of the excommunication of one of the greatest sages and the death of another. In our last post we discussed the triumph – in this we shall discuss the tragedy.

“What is Achnai? Rav Yehuda said in the name of Shmuel: [It means] that they encompassed it with arguments as a snake.” Introducing a debate with a comparison  to a snake is not a harbinger of a positive outcome. The exact nature of the debate is never explained in the Talmud[1] - apparently this oven was so famous all knew what it was – and when all is said and done, is irrelevant.

As so often happens in heated disputes, the initial cause of the dispute is long forgotten as new more powerful areas of dispute arise. The debate became so heated that “on that day all objects which Rabbi Eliezer had declared clean were brought and burnt in fire. Then they took a vote and excommunicated him.”

What was it about this debate that caused passions to be so raised? After all the Temple had been destroyed years earlier, and the laws of Tumah and Tahara were no longer applicable. There was no need to issue a ruling on this oven; such a ruling could wait until the Temple was rebuilt. Yet for reasons that are not clear, Rabbi Eliezer insisted on proving his view correct and Rabbi Yehoshua was equally adamant in proving him wrong.

Rabbinic debate is the basic fabric of the Talmud. Beit Hillel and Beit Shammai, Rabbi Akiva and Rabbi Yishmael, Rav Meir and Rav Yehuda, Rav Yochanan and Reish Lakish, Rav and Shmuel, Rav Huna and Rav Chisda, Abaye and Rava. The Talmudic way is for each community to follow the rulings of their rabbi, even when they disagree with the majority. Rabbi Eliezer - the same Rabbi Eliezer  – ruled that on Shabbat one may cut down trees in order to prepare wood for a fire to sharpen a knife so that a brit milah could take place on Shabbat (Shabbat 130a). This was considered by the majority of rabbis to be a desecration of Shabbat, but no attempts were made to end this practice. In fact, the Talmud is full of praise for those who followed this view even claiming that they were granted long life.

Similarly the people of the Galil used to eat their poultry with milk in keeping with the view of Rav Yossi Haglili that there was no need for a rabbinic prohibition to mix poultry and milk.

Why then did the rabbis feel the need to “take a vote and excommunicate” Rabbi Eliezer Hagadol? Is the purity of an oven more important than the “violation” of Shabbat?

Perhaps we can understand what transpired if we put the story into historical context. The Temple had been destroyed, the Sanhedrin disbanded, political independence lost and infighting was rampant. Strong leadership was desperately needed to unite the Jewish people and ensure their survival. And strong leadership they received with Rabban Gamliel as the Nassi at the reestablished academy at Yavneh. He understood that if he did not unite the people and unify Jewish practice, Judaism might not survive.

It was under his leadership that the halacha was ruled to be in accordance with Beit Hillel, ending the potential for an irreconcilable split of the Jewish people; “When the students of Hillel and Shammai proliferated… the Torah became like two Torot” (Sanhedrin 88b). Rabban Gamliel took a harsh stand against his colleague Rabbi Yehoshua (see Brachot 28a and Mishna Rosh Hashana 2:8-9). While his method may have been harsh – and he was impeached for his highhanded manner - he had little choice in taking a hard line. Had he let Rabbi Yehoshua maintain his view regarding the calendar, the Jewish people would have observed Yom Kippur on different days and the Jewish people would have split into two[2].

Apparently, the rabbis felt that allowing Rabbi Eliezer to follow his view at that time would have caused a split of the people of Israel. Thus they “gathered all the items declared by Rabbi Eliezer to be pure and burned them on that day.[3]” After the sina’at chinam[4] and the battles of the Pharisees and the Sadducees that were rampant during the second Temple period it was crucial to have a unified ritual in the Temple. What one did in one’s local community was for each community to decide and thus they were willing to allow Rabbi Eliezer to perform brit milah his way even if they felt it violated Shabbat. But the Temple was no place for varying views.

It seems quite clear from the subsequent discussion of the Talmud that the decision to excommunicate Rabbi Eliezer was a tragic mistake. As a result of the excommunication “the world was then smitten: a third of the olive crop, a third of the wheat, and a third of the barley crop. Some say, the dough in women's hands swelled up…Great was the calamity that befell that day, for everything upon which Rabbi Eliezer cast his eyes was burned up. Rabban Gamaliel too was travelling in a ship, when a huge wave arose to drown him. 'It appears to me,' he reflected, 'that this is on account of none other but Rabbi Eliezer ben Hyrcanus.' Thereupon he arose and exclaimed, 'Sovereign of the Universe! Thou know full well that I have not acted for my honour, nor for the honour of my paternal house, but for Thine, so that strife may not multiply in Israel! 'At that the raging sea subsided” (Bava Metzia 59b).

But such was but a temporary respite. The Gemara recounts how Ima Shalom[5], Rabbi Eliezer’s wife and the sister of Rabban Gamliel would not let her husband recite tachanun, lest during these special supplications he pray that Rabban Gamliel be brought to account for the way he was treated[6]. As one can imagine such oversight might work for a while but not indefinitely. As tachanun is not said on Rosh Chodesh, Ima Shalom did not watch over him as he davened one Rosh Chodesh. But she was mistaken – that particular month had 30 days and Rosh Chodesh was not until the next day (apparently the notion of two days of Rosh Chodesh did not yet exist) and so Rabbi Eliezer said tachanun.

“She found him fallen on his face. 'Arise,' she cried out to him, 'thou hast slain my brother.' In the meanwhile an announcement was made from the house of Rabban Gamliel that he had died.[7]”

This story comes on the immediate heels of the discussion of ona’at devarim, of causing needless mental anguish with our words. After detailing the severity of ona’at devarim with rabbinic teachings such as “it is better to throw oneself into a burning furnace than to embarrass somebody in public, ”the Gemara presents an example of ona’at devarim through the story of Rabbi Eliezer’s excommunication.

The discussion regarding ona’at devarim does not just introduce the story of Rabbi Eliezer; it concludes it as well. When Ima Shalom was asked how she knew her husband’s tears had caused the death of her brother, she responded, “I have this tradition from my father's house: All the gates [to heaven] are closed save for shaarei ona’ah, the gate of the oppressed.”

The Gemara continues with the teaching “hameneh et hager, one who oppresses the stranger violates three negative commandments.”

And the sugya ends with a teaching of none other than Rabbi Eliezer Hagadol. Excommunication or not he remains Rabbi Eliezer Hagadol. “Rav Eliezer Hagadol, Rabbi Eliezer the Great, said: Why did the Torah warn against [the wronging of] a proselyte in thirty-six, or as others say, in forty-six, places?…What is the meaning of the verse, Thou shalt neither wrong a stranger, nor oppress him; for ye were strangers in the land of Egypt? It has been taught: Rav Natan[8] said: Do not taunt your neighbour with the blemish you yourself have.”

[1] According to Rashi, we are dealing with an impure oven that was taken apart and put back together with a layer of sand between the rows. The Sages argued that this was a “renovation” not a new vessel and hence, it retains its impure status. Rabbi Eliezer argued that it constituted a different vessel and hence was now pure.

The Rambam understands that the oven was initially constructed with sand between its layers. The dispute is whether it should be considered one or many vessels. If it is one, then if any part of the oven became tameh the entire oven would be tameh, whereas if it is many vessels then only that section that came in contact with the tumah would become impure.

[2] I have often noted that with all the disputes amongst the Jewish people, thankfully all agree on the fixing of the calendar. We are still one people celebrating our joyous times and commemorating our tragic occasions together. I shudder to think what would be if the calendar were ever to become a bone of contention.

[3] While the laws of tumah and tahara were no longer applicable, many pious people continued to observe them nonetheless, undoubtedly hoping and even expecting to be able to observe them in the near future when the Temple would be rebuilt

[4] The Netziv claims that a major cause of sina’at chinam was the unwillingness of various religious groups to tolerate the views of others. (See his powerful introduction to sefer Breisheet.)

[5] Once again we see how names reflect ideas; she was the “mother of peace” trying to bring peace between her husband and brother. Sadly she did not succeed.

[6] Fascinatingly, Rabban Gamliel does not appear in the story until this point. As the Nassi he was the one ultimately responsible for what transpired and he bore the price.

[7] It surely is no coincidence that it was Rosh Chodesh that caused his death. He had publically humiliated Rabbi Yehoshua over the calculation of the new moon, forcing him to publicly violate what was for him Yom Kippur.

[8] This is the same Rav Natan who earlier in the story had met Eliyahu and asked him what G-d was doing during the initial debate. Surely this is no coincidence.