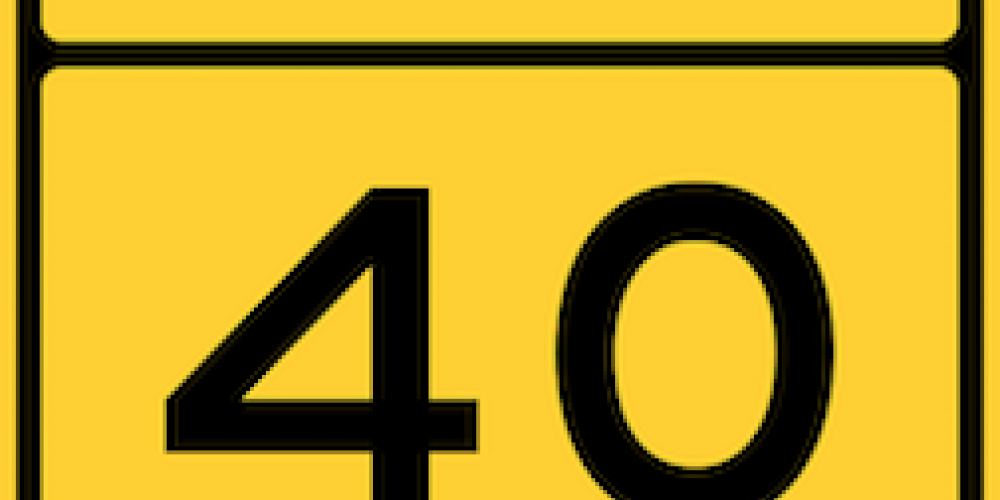 Forty years is a long time. In Biblical numerology, the number 40 indicates transformation. Forty is the number of days it takes for a fetus to develop. It is the length of time that delineates one generation from the next. The flood lasted 40 days, bringing with it a new world order; and Moshe spent 40 days on Sinai transforming the spiritual world. The Jewish people became a nation only after being strangers in a foreign land for 400 years, and it took 40 years of wandering in the desert before reaching our destination. The Temple was built 480 years after we left Egypt (Melachim 1,6:1)—40 years for each of the 12 tribes of Israel. The Temple itself was, at least according to one opinion, built in “no-man’s land”, an area that was not to be divided amongst the 12 tribes. It is not by chance that Moshe lived for 120 years, with our Sages dividing his life into three periods of 40 years[1]. And it can take, the Gemara asserts, 40 years until we can fully appreciate our blessing.

For forty years the Jewish people wandered in the desert, miraculously sustained with food from heaven, water from a moving well and protected from predators – human and animal alike – by the clouds of glory. Our Sages go so far as to assert that the Jews had no need to go to the washroom[2], with the manna food being totally absorbed in their bodies. Yet instead of being grateful, the Jewish people complained and complained again regarding their food.

Moshe, in the words of the Gemara, said to the Jewish people that they are “ungrateful, the children of the ungrateful[3]” (Avodah Zara 5a). Yet it was not until 40 years later that Moshe “hinted” at this failing of the Jewish people.

Telling people how wrong they is rarely, if ever, effective. As Rashi notes in his opening comments on sefer Devarim, one should offer words of rebuke only indirectly. This act of self-restraint, so difficult for so many, may actually lead to improvement. As modern management teaches, not only must one be smart in offering rebuke, one should always begin a rebuke with a compliment.

Yet Rashi’s focus here is not on the practical approach to rebuke, but on “the honour of the Jewish people”. Even if a hinted rebuke would be less effective – and there are times that much more than a hint is needed – the great honour due to the Jewish people precluded direct rebuke. After all, this was a nation that followed Moshe into a barren desert, accepted the Torah while wandering aimlessly for 40 years. It would have been so much easier to stay in Egypt and assimilate like 80% of their brethren did[4]. They may have had some faults – who doesn’t?—but what an amazing people, whose honour must always be protected[5].

As for practicalities, Moshe waited 40 years—until he was about to die—to rebuke the people. That such is the most effective time to offer rebuke is something he learned from Yaakov, who waited many years, until he was on his deathbed, before offering rebuke to his children. The passage of time combined with an impending death has a much greater chance of inspiring change.

The Gemara (Avoda Zara 5b) understands Moshe’s 40-year delay in offering rebuke in a slightly different vein. “Yet to this day, the Lord has not given you a mind to understand or eyes to see or ears to hear” (Devarim 29:3). It took the Jewish people[6] forty years until they finally began to appreciate and internalize all that was done for them. Commenting on this, Rava notes that, “one does not go down to the depths of his master’s teaching until 40 years [have passed]”.

To fully understand something takes much time. It is what we call historical perspective. We may hear things and think we understand, but it can take many, many years until we fully grasp what we were taught. When Our Sages taught, “the age of forty for understanding” (Avot 4:21), they were referring not only to a given age, but to a time interval needed to fully grasp an idea.

Forty years ago, I was in high school in Toronto. As all who knew me in my younger years can attest, I was not always the most serious of students. There is much that l learned forty years ago that I did not appreciate at the time, but do today.

As a teacher, one rarely—if ever—knows how much impact we may have on our students. But even when it feels like it may be very little, we are planting seeds; seeds that may take forty years to germinate.

[1] Our Sages (Sifri, Devarim 36:7) claim that Hillel, Rabbi Yochanan ben Zackai and Rabbi Akiva also lived to the age of 120, with each of their lives also divided into three segments of 40 years. This teaching is meant not for the historical record, but to highlight three of the most transformative figures in Jewish history.

[2] It is hard for us to imagine how inconvenient going to the bathroom used to be. There is much Talmudic discussion regarding going to bathroom precisely because it was such a big deal.

[3] Interestingly, the “parent” who was ungrateful is none other than Adam HaRishon who, instead of being grateful that G-d created Eve as his helpmate, blamed her for causing him to sin. While the Jews have a unique role in history, we are first and foremost members of the human race.

[4] This is especially true if we accept the simple (but often ignored) reading of the text that life really was not so bad in Egypt. They had meat, fish, and vegetables galore, living in the most advanced society. They were even beloved by the Egyptians (see Shemot 11:3), who are referred to as the reim, friends of the Jewish people. Yes, there were difficult times, but that was long ago; and as the Netziv notes, it was not that widespread. No wonder the people often yearned to go back to Egypt.

[5] If such were true 3,500 years ago, how much more true is it today? In a post-Enlightenment world, with so many choices and opportunities antithetical to Judaism, those who nonetheless choose to identify as Jews are to be greatly lauded. And if one can continue to do after the Holocaust, one is deserving of the greatest of honour. Yes, there is much that needs improvement and much to rebuke, but all Jews must be given the greatest of respect.

[6] Rashi claims that this passage actually refers to Moshe Rabbeinu who, until 40 years had passed, did not fully grasp the ingratitude of the Jewish people towards G-d. Despite his closeness to his Teacher, he too needed 40 years to understand what G-d had taught him.