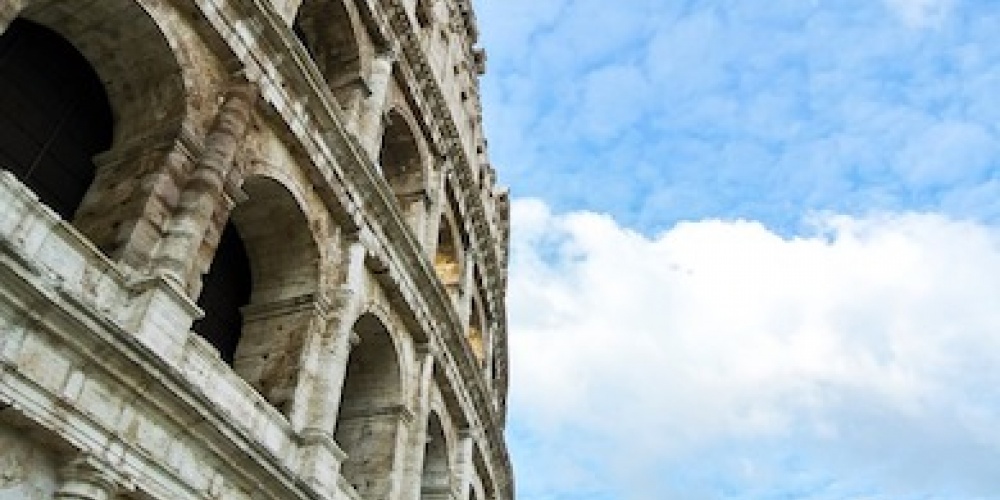 As all who study Daf Yomi are well aware, halacha and aggadah—the legal and extralegal portions of the Talmud—“co-exist” side by side, with no hint that one is more important than the other. Actually, they do much more than co-exist. There is a deep connection between the two, with aggadic discussions reflecting the halachic topic at hand. Finding those links—an area that has attracted scholarly interest in recent years—adds much meaning to both halacha and aggadah.

“In the future, G-d will bring a sefer Torah, place it in His lap and say: Whoever was occupied with it, come and get your reward” (Avodah Zara 2a). The nations of the world came running, each eager to collect their reward, proud of their contributions towards the wellbeing of the Jewish people. G-d, the Gemara relates, asked each nation to come to be judged individually; and due to its being “first in importance”, Rome was the first to enter.

G-d asked them, “With what were you involved?”

They answered that they “built many marketplaces, many bathhouses and increased the amounts of gold and silver; and all this, we did only for the sake of Israel, so that they could learn Torah”.

Physical health and economic wellbeing are prerequisites for spiritual growth. “If there is no flour, there is no Torah” (Avot 3:17). Rome, by contributing so much to the development of society, also contributed much to the flourishing of Torah.

G-d does not reject the basis of this argument. It is true that the great contributions of Rome allowed Torah to flourish. Rather, G-d argues that the Romans deserve no credit for this. They built marketplaces, bathhouses, and instituted excellent economic policies not so Jews could learn Torah, but for their own reasons: “marketplaces to bring harlots, bathhouses to beautify yourself, and gold and silver belong to Me.”

This exchange is rather startling. What is glaringly absent is any mention of Rome’s role in the destruction of the Temple[1] and exile of our people – events that actually threatened the future of Torah. That the Romans would neglect to mention this is understandable, but that G-d in His response should not is a little bit more baffling.

One could argue that ein hachi nami (“yes, this too!”). G-d could have easily used such an argument but chose not to, responding to the Romans on their own terms. There was no need to use our most powerful ammunition.

Conversely, one might argue that in the worldview of the rabbis, Rome’s role in the destruction was—from a theological perspective—minimal. Of course, the Romans physically destroyed the Temple, but it had ceased to be a Beit Hamikdash years earlier, as rampant corruption and civil strife had rendered it little more than a nice building made of sticks and stones (and some gold). Unable to preserve law and order, the Sanhedrin, which was housed in the Temple and an integral part of it, exiled itself some 40 years before the destruction.

The Romans did, in fact, provide many opportunities for Torah. They allowed Rav Yochanan ben Zakkai to establish the great Torah centre of Yavneh – one that literally saved Torah from oblivion – and it was under Roman rule that Rebbe Yehuda Hanassi, a friend of the Roman emperor Antoninus, edited the Mishna, thus guaranteeing the survival of the Oral Law.

While this does not absolve the Romans of the terrible things they did to us, the Jewish people have always preferred to look inwards, seeking to derive lessons they could learn moving forward. Wallowing in self-pity and blaming others is an exercise in futility, and most counterproductive [2]. It is this amazing ability to move forward after great tragedy that explains much of the enduring success and greatness of the Jewish people.

Yet G-d’s response to the Romans does not appear very convincing. This same story (with minor variations) appears in masechet Shabbat. “Rabbi Yehuda opened, saying: ‘How wonderful are the actions of this nation; they built marketplaces, bathhouses and bridges!’” (Shabbat 33b). Rabbi Yossi listened quietly and did not respond. It was only Rabbi Shimon bar Yochai who used the same arguments our Gemara ascribes to G-d. “Everything that they established, they established only for their own purposes. They established marketplaces to place prostitutes in them; bathhouses, to pamper themselves; and bridges, to collect taxes from”.

Rabbi Shimon bar Yochai reflects a minority view – and for good reason. In Jewish law, the reason we help someone is not determinative. Of course, one should do so because one wants to sincerely help others, but even absent that noble goal, one who helps another—for whatever reason—is to be thanked. One may give money only because one is forced to do so, or only to get their name on a building, and give much less than they should. Nonetheless, we must show great gratitude for what they have done.

The Egyptians did not display great magnanimity to the Jewish people, to say the least. Nonetheless, we are not to despise them because whatever their motivation may have been, they provided a home for us (Devarim 23:8).

Furthermore, the Gemara’s continuation of the story—relating how Rabbi Shimon had to go hide in a cave and then return to it when he finally emerged, because he was unable to accept the world as it was—would seem to be a veiled critique of his approach. And even if G-d “agreed” with Rabbi Shimon bar Yochai, is following the approach of Rav Yehuda worthy of such a harsh response?

One could argue that it was the arrogance of the Romans in claiming, “and all this we did only for the sake of Israel, so that they could learn Torah”. It is one thing to claim that the actions of the Romans benefited the Jewish people and were therefore worthy of reward, but to claim that such was the motivating factor is something else – a lie.

Taking this a step further, we may suggest that G-d’s harshness reflects the difference between the human and heavenly courts. We, as imperfect human beings, are unable to administer complete and total justice. We surely cannot know the motivations of others (a point we would do well to take to heart). Heck, half the time we can’t even know our own motivations for acting the way we do. Thus, we humans can only assess actions themselves. If one does something positive, we are to acknowledge such. And this is what Rabbi Yehuda did.

But the Divine Creator knows us better than we know ourselves. “G-d desires our hearts”. What counts in heaven is not results—something that ultimately, only G-d controls—but the reasons we act the way we do.

We live in a world of bottom-line practicality, where it is the results that matter. But in heaven, it is different. There, it is our inner essence, reflected in our heart’s desires, that matters most. We on earth should be thankful to the Romans; but G-d does not need their marketplaces, bathhouses or money, and uses different standards to judge us. Because “whether one does a lot or a little [it does not matter], as long as our heart is directed towards heaven.”

[1] Interestingly, this argument serves as the basis for the claim of the Persians that they deserved to be rewarded for what they had done. The Gemara wonders why, after seeing how the claims of the Romans were dismissed, the Persians came with a similar claim. To this, the Gemara responds that they said, “They destroyed the Temple, but we build the Temple”. It was Cyrus the Great who granted the Jews permission to rebuild the Temple.

[2] This is a message the Torah drills in time and time again regarding our sojourn in Egypt. We are told over and over and over again that we must never oppress the stranger because we were strangers in the land of Egypt. The rabbis looked to find which sins of ours were the cause of our enslavement, naming at least three more beyond the sale of Yosef. The Torah’s command “not to return to Egypt” is much more than a geographical restriction.

[3] Unlike the “rituals” and “religious” laws of the Torah, our motive for helping others should not be because it’s a mitzvah. That turns a person into an object. It is for this reason that there are no brachot on mitzvoth bein adam lechaveiro.