Yoma 54: Love in the Temple 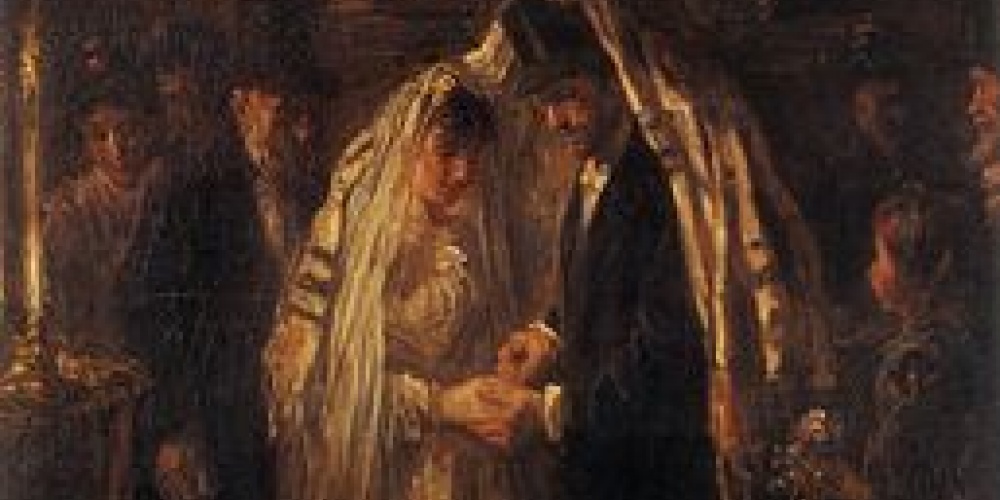 The relationship between G-d and the Jewish people is often compared to that of a husband and wife. Full of love and even desire, it is meant as a lifelong bond--which for the Jewish people means eternity. The occasional spat, where there is some degree of distance, is to be expected; but the love remains. Even in the tragic case of divorce--when the Temple was destroyed, and we were exiled from our land--G-d promised that He would take us back, and the bond of love for His nation would never be fully severed.

This love is "physically expressed" in the confines of the Temple, the home of the Divine presence. The Ark containing the luchot habritwas to have poles along its sides. The Gemara explains that the poles would protrude into the parochet, the curtain covering the ark, appearing like two breasts. On Yom Tov, when the Jewish people would assemble in the Temple, the kohanim would roll down theparochet so that all could see the keruvim that adorned the ark. These keruvim, one in the image of a man and one in the image of a women, would be embracing each other, leading the kohanim to tell the people, "See how beloved you are before the place [G-d], as the love between a man and woman!" (Yoma 54a). The Gemara is perplexed by this, as there is a prohibition against viewing the ark: "But they shall not go in to see the holy things as they are being covered, lest they die" (Bamidbar 4:20).

Once again, using the imagery of husband and wife, the Gemara explains that such a prohibition ceased to apply once the Temple was built. "It may be compared to a bride--when she is in her father's home, she is modest in respect to her [future] husband; once she enters her father-in-law's house (i.e., she gets married), she is not modest from (with) her husband".  With the building of the Temple, the marriage of the Jewish people was complete, and that which was forbidden to see beforehand was now permissible.

The Babylonians had great respect for the Jewish people, and understood that we hold the key to blessing and curse[1]. When they destroyed the Temple, they not only burned a beautiful edifice, they destroyed a philosophy of life--one that saw harmony between the physical and spiritual worlds. To have sexual overtones in a Temple was, in their eyes, nothing less than blasphemy. The physical limited rather than enhanced spiritual growth. This notion was, as we all know, later developed by Christianity, culminating in their rejection of marriage for their priests.

Judaism saw the body as a holy gift from G-d. Left to its own devices, it could debase man; but with proper control and restraint, it was ennobling. It is not by chance a Jewish wedding ceremony is known as kiddushin, holiness. It is instructive that the Rambam's Sefer Kedusha, Book of Holiness, consists of the laws of slaughtering animals and those of forbidden foods and sexual relations--and nothing else.

The physical and spiritual are flip sides of same coin--each is a vehicle to come closer to G-d. And just as the keruvim adorned the ark, bringing something physical to a spiritual centre, we must imbue our physical locations with spirituality. Be it the workplace, our highways, or our athletic facilities must reflect holiness. When one separates the "mundane" from the holy, we have profaned that holiness, and are left with nothing[2].

[1] The fact that they took the Temple vessels back with them to Bavel, as the Romans did with the spoils of the second Temple, testifies to the value they saw in these vessels. Contrast that to the attempts of Arab world to erase all connections between the Jewish people and the Temple.

[2] It seems to me that many of the financial scandals perpetrated by otherwise very observant Jews are a result of a worldview that sees work as a barrier to--and hence separate from--spiritual growth.