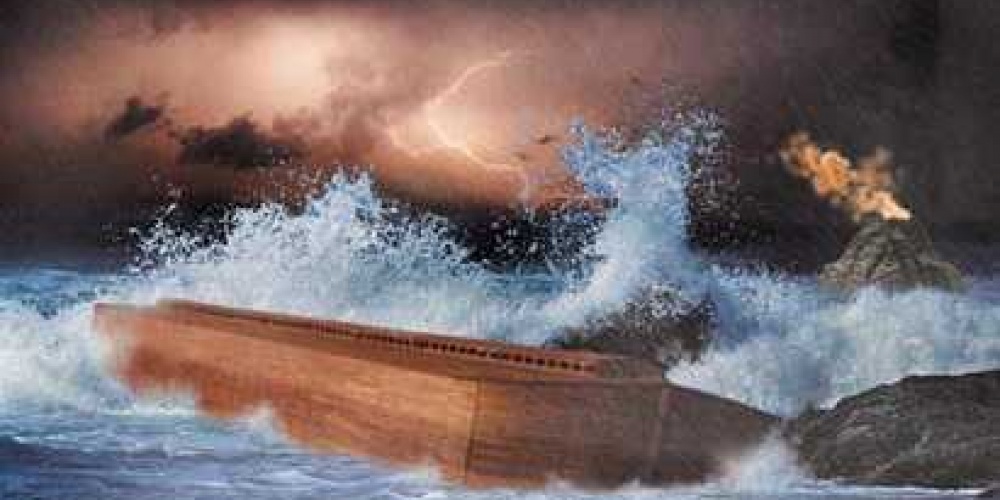 "In the midst of the day, b'etzem, Noach came, and Cham and Yefet, the children of Noach, and the wife of Noach, and three wives of his children with them, to the ark[1] (Breisheet 7:13). Commenting on the use the word b'etzem, Rashi quotes the Midrash that Noach entered the ark in broad daylight. Noach, as is often noted, had little influence on his generation. They scoffed at his warnings of impending doom if they did not repent--and he had plenty of time to give those warnings, spending as he did 120 years building the ark. They continued on their merry way, engaging in idolatry, sexual immorality, and theft.

But soon, the party was over and the floodwaters began. Noach gathered his family and, with water raging around him, entered the ark. "The people of his generation", Rashi notes, had vowed that if Noach would even attempt to enter the ark, "we will break it and kill him. G-d thus responded: I will bring them in, in view of all, and let us see whose words will be fulfilled".

While I can't speak for others, I can assure you that, had floodwaters been raging and there was someone with a protective boat, the last thing I would do is try and break the boat. And regardless of my personal opinion of the owner of the boat, I would do anything to get inside that boat. I surely would not kill the only person who knew how to navigate the ship.

That is what one would do...unless death is worshipped more than life, and inflicting pain on others is more important than saving oneself. There is nothing more painful for those consumed by hatred that seeing others prosper. They would rather hurt others than help themselves. No wonder our Sages teach that the sin that sealed their fate was that of theft! No wonder the only fate they deserved was utter and total destruction! They were, after all, the world's first terrorists.

As Rashi notes (Devarim 32:48), on two other occasions there was a need for G-d to act b'etzem hayom, in the midst of the day. The Jews left Egypt b'etzem hayom hazeh--as here, too, the Egyptians vowed they would never let the Jews leave and here, too, the Jews were taken out in broad daylight. While the Egyptians were willing to hurt the Jews, at least their motivation was understandable, even if reprehensible. And the Egyptians survived another day, with the Torah even allowing their descendants to convert to Judaism. This contrasts with the people of Amon and Moav, who had no legitimate reason not to sell the Jews food and water in the desert.

The third b'etzem is a most positive one. "And G-d spoke to Moshe b'etzem hayom hazeh, saying: ascend to the mount of Aveireen" (Devarim 32:48). The Jewish people were not going to let Moshe die. He had shepherded them, redeemed them, fed them, taught them, and fought for them at every turn; they could not imagine life without him (despite not always acting in ways that would demonstrate that). Here, too, G-d had "no choice" other than to take him in broad daylight. The Jewish people would need to learn to adjust to new circumstances with a new leader.

Like G-d, we, too, must at times act b'etzem hayom hazeh, in the midst of the day, even as people scoff at us, belittle us and may even try to hurt us[2].  We must proudly stand up for what we believe in and maybe, in contrast to Noach, we will have some success at influencing others.

[1] Noach, to whom women remained nameless, could not be the founder of the Jewish people. G-d's covenant is with Abraham and Sarah.

[2] While Jewish law, with very rare exceptions, does not require that we risk physical injury, we may have to endure slurs against us and loss of money or "friends" as we affirm our principles.