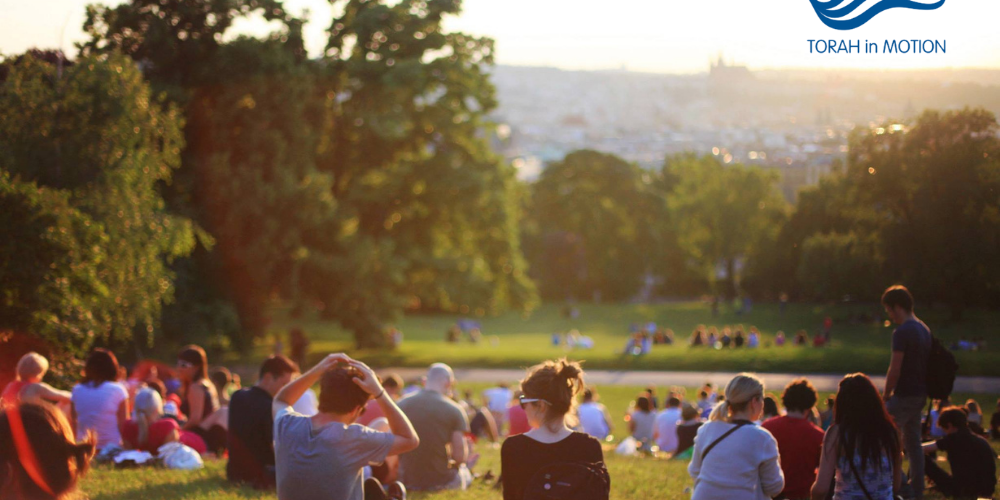 The home plays a critical—if not the critical—role in the development of Jewish life. The efforts of schools, shuls, camps, Israel trips, and the like are unlikely to have major lasting impact if the messages of Jewish living are not reinforced at home. Passover, the holiday that laid the foundation for Jewish nationhood, is thus centred around the home. It is worth noting that chapter twelve in sefer Shemot, which describes the lead-up to the Exodus and our formation as a people, contains the word bayit, home, no less than fourteen times.

Before redemption could even take place, we had to "take the blood and place it on the doorposts of the houses" (Shemot 12:7). We had to proudly display to all that ours was a Jewish home, so that "the blood shall be a sign on your homes". Blood is the essence of life, and we must devote our lives ensuring, first and foremost, the physical survival of the Jewish home. However, simple physical survival is not our only goal. "By the first day, you shall remove leaven from your houses" (Shemot 12:15).

Our Sages understood that while leaven is a symbol of freedom—a world in which one may sit back and take the requisite time to prepare a meal—too much time and freedom can lead to arrogance and haughtiness. It is no coincidence that, with very few exceptions, all flour offerings brought to the Temple were of unleavened bread. Unlike in Egypt, where eating matzah indicated our slavery under Pharaoh, in the Temple the offering of matzah declares that we will, if necessary, subordinate our freedom and independence to the will of G-d. It is service to G-d that actually frees us from subservience to man.

At times, the outside influences of society are so corrosive that a Jew must strengthen his own home even at the expense of complete isolation from the world at large. "You shall not leave the entrance of your house until morning" (Shemot 12:22). Only when the darkness dissipates may we safely venture out, confident that the light of Torah will guide us. And as we go out to the street, we must be cognizant of G-d, Who is constantly above us. "When your children will ask you, you must answer, ‘It is the Passover service to G-d, Who passed over the houses of the children of Israel’" (Shemot 12:26-27).

It was not only Jewish homes that had to accept G-d's demand of justice for all. "The Nile will swarm with frogs, and they will enter your homes” (Shemot 7:28). "If you do not let My people leave, I will send swarms of harmful creatures into your homes” (Shemot 8:17). ”They will fill your homes [with locusts]” (Shemot 10:6). This warning of home invasion culminates with, "there was no house where there were no dead" (Shemot 12:30).

What is it that distinguishes an Egyptian home from a Jewish one? While one may be tempted to suggest concepts like shabbat, kashrut, learning, family purity, or mezuzah, this week's parsha, Metzora, adds another dimension. "When you arrive in the land of Canaan, I will place the mark of the leprous curse in the land you inherit" (Vayikra 14:34). The Torah goes on to describe how the afflicted house must be quarantined with any leprous spots removed and the home replastered. "If the affliction returns" the house must be demolished (Vayikra 14:45).

Our Sages declared that leprous marks, whether on a person, his clothes, or in a home, are the result of gossip and slander, haughtiness and excessive materialism. The way we speak in our homes, the values that we demonstrate to ourselves and our children, are the crucial components of a Jewish home. Our Talmudic Sages saw a direct link between a homeowner who is unwilling to share his possessions and open his home to others in need, and the subsequent destruction of such a house. This punishment of "the one to whom the house belongs" (Vayikra 14:35) is meant to teach us that ultimately, our homes "belong" to G-d and must be used in His service.

Interestingly, the law of leprous houses applies only in the land of Israel. There may be Jews who are unwilling to share, whose focus is money and power, and who belittle others. However, in order to build a Jewish state, we must eschew these negative values and focus on working together; building a community that values humility, civility and sensitivity. A nation is built one home at a time, and every home counts. If we succeed, then perhaps our prayer at the end of the seder—next year in a rebuilt Jerusalem—will come to fruition.