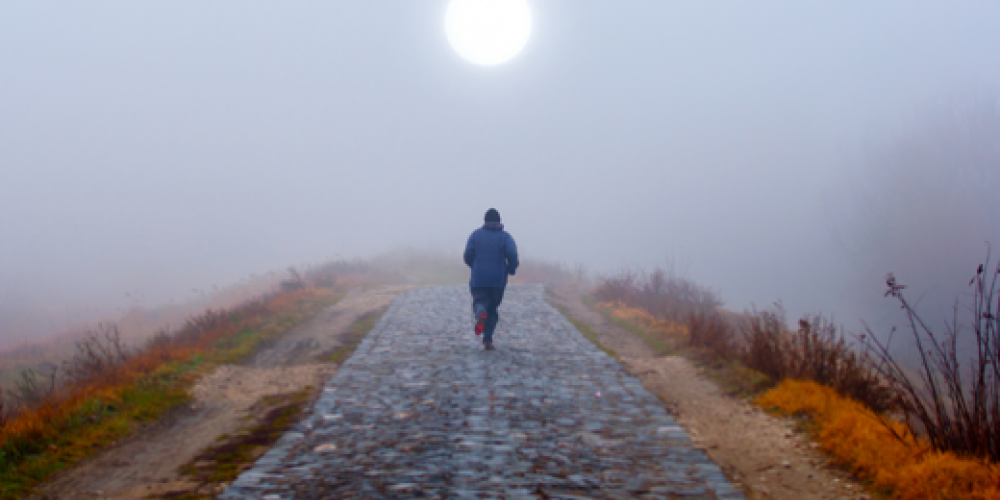 Avraham Avinu is known as "ha'Ivri" as the world was on one side, and he was alone on the other. It is not easy challenging the ideas of society around you - and G-d understood that to be successful, Abraham would have to leave home and travel to a foreign land. While Abraham had to start anew, away from most of his family, he was not lonely. He had a loving wife, seemed to make friends easily, and was heavily involved with political leaders around the world like Pharaoh, Avimelech, and the 9 kings at war. He made treaties, had economic success and seemed to always be in the company of others.

Unlike Sarah, to whom Yishmael was just a stepson, Abraham loved both Yishmael (his name even has a Jewish ring to it) and Yitzchak, and resisted sending Yishmael out of the house. He died, the Torah tells us, "at a good age, old and satisfied, and he was gathered to his people" (25:8).

Abraham perfected the art of being a ger and a toshav, a stranger and a resident (see 23:4) at the same time. Yet the same could not be said of his grandson, who would be the father of "b'nai Yisrael". "And Jacob remained alone" 32:25) is an apt description of his life. Though a twin - something that in most circumstances creates an immediate familial bond - he had little in common with his brother, to say the least. His father had little to do with him, and while his mother showered love upon him, it was her suggestion that Yaakov trick his father, forcing him to flee, never to see his mother again.

While Abraham arrived in Israel with a wife and his nephew, Yaakov left Israel alone. He was not even sure that G-d was with him (see 28:20). And while over the ensuing 20 years, Yaakov marries (and marries again) and has 13 children, he is still in many ways alone. He marries the "wrong" woman, and Leah and Rachel become the template for tzarot - literally, problems - the rabbinic term used to describe co-wives. He has a large family, but seems close to no one. His relationship with his uncle is tense. And his hard work - "By day I was consumed with scorching heat, and at night by frost, when sleep was snatched from my eyes" (39:40) is lonely, difficult and unappreciated.

Yaakov decides it is time to come home, yet he fears Eisav's hatred has not abated. He is forced to divide his family into camps "lest Eisav come to one and hit [kills] them, and the other camp will be left over as a remnant" (32:9). And while that encounter goes better than could have been expected, soon afterwards, Rachel dies in childbirth. While Leah is apparently still alive, no mention is made of her. We are not even told of her death, leaving us to speculate as to whether she was alive during the Yosef saga. Such a lacuna could indicate that Yaakov had little in common with her - and that even her death had little impact on him.

Yet perhaps saddest of all, there is a gaping generation gap between Yaakov and his children; he does not understand them, nor they him. While he wants good neighbourly relations with the people of Shechem, Shimon and Levi think otherwise - a tense debate that continued all the way to Yaakov's deathbed where he refused to bless them. His eldest, Reuven, moves his bed from Bilha's tent (Rachel's maidservant) to Leah's. And despite the best efforts of his children to comfort him vis a vis Yosef, "he refused to be comforted." He wept - alone - for years and years. Yet even with Yosef, there is much estrangement - on his deathbed he cannot even trust his favourite son Yosef to bury him in Israel, forcing him to take an oath.

Yaakov's last years in Egypt were seemingly spent alone; he did not even recognize his own grandchildren - he may not have even known they existed. Is it any wonder that unlike his grandfather and his father (35:29), Yaakov did not die satisfied in days? Rather, at a much younger age than Abraham or Yitzchak, "he expired and was gathered to his people".

"They are a nation that dwells alone", Bilaam declared. As the founder of the children of Israel, Yaakov, too, spent many years dwelling alone. But while we may be abandoned by others, G-d declares that "I am with you.I will return you to this land because I will not leave you until I keep My promise to you". May those promises be soon fulfilled.