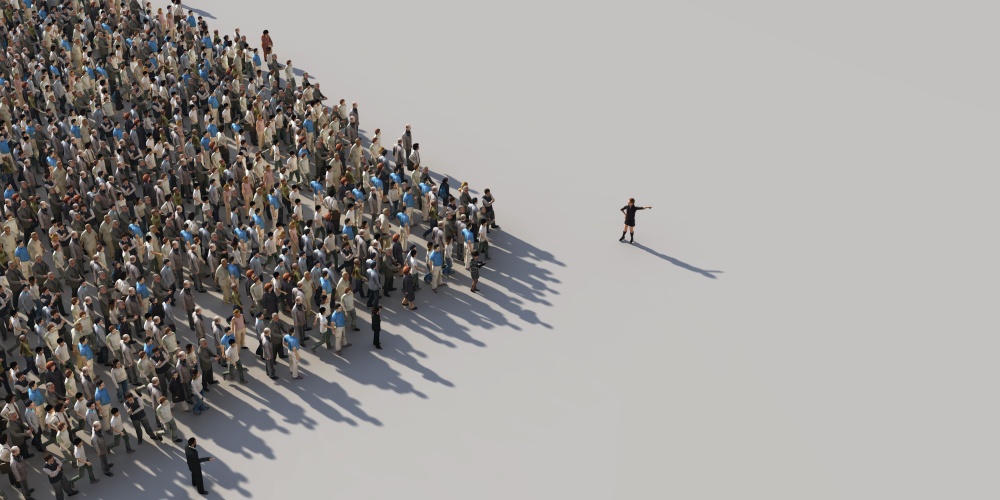 One often hears people bemoaning the dearth of leadership that seems to surround us. Whether it is in politics, religious life or in the sphere of general morality we often yearn for the "good old days" when men of vision, tenacity and determination led the people instead of just following the latest opinion poll.

While some of this image is an idealization of the past, there is no doubt that our generation has not been able to attract the most capable people into positions of leadership, leaving a vacuum that is eagerly filled by people who lack the necessary integrity and values which make a respected, effective leader.

It is equally true, though, that society gets the leaders it deserves. We create the climate that encourages certain types of people to grab the mantle of leadership. If money, negative advertising and aggression is what it often takes to get elected, it is because these are the values which society looks up to. If personal morality in our leaders is not an issue that concerns us, it is precisely because society views morality as a personal manner without public repercussions. While we easily see the connection between societal priorities and elected officials in a democracy, this also holds true - though maybe less so - in a dictatorial regime. Evil can be carried out only if there are willing accomplices and an indifferent public. We, unfortunately, learned this lesson during the horrors of the Holocaust.

With this in mind, we can begin to understand why the Egyptian people had to suffer during the plagues which continued due to Pharaoh's intransigence. Pharaoh was only able to persecute the Jewish people because of his many helpers in society. While there is no doubt that innocent people suffered during the plagues - as they always do during difficult times - by allowing Pharaoh to continue his maltreatment of minorities, the Egyptian people as a whole were deserving of the punishment they received.

Additionally, the 10 makkot served as an educational tool bringing home the message that G-d is not only the G-d of creation but also of history and nature.

The concept of a G-d who intervenes in worldly events and to whom we are accountable was a message that was meant not only for the Egyptians but also - and perhaps primarily - for the Jews. The 70 souls who had arrived in Egypt 210 years earlier knew that they were part of a family destined to forge a unique relationship with G-d. To their millions of descendants, the teachings of Avraham and Sarah, Yitzchak and Rivkah, Yaakov, Leah and Rachel had been long forgotten. Their modes of thinking and action were shaped by the all-pervasive Egyptian culture. As is often the case, certain remnants of their background were maintained even as they were assimilating. They continued to speak Hebrew, give their children Jewish names and to wear distinctly Jewish clothing. However, these cultural links were not enough to guarantee the survival of the Jews as a distinct people. In fact, they even stopped performing the rite of circumcision thereby severing their link to Avraham.

While it was hoped that the plagues would convince the Jews to acknowledge G-d and accept his demands upon us, they were only partially successful in this regard. While it took great courage and a leap of faith to follow Moshe and Aharon into an unknown desert, the Jewish people spared no opportunity to complain whenever the occasion arose. G-d's past benevolence was quickly forgotten. Furthermore, the Midrash claims that only 20% of the Jews actually left Egypt. The remaining 80% remained unconvinced, preferring to stay in Egypt.

People are not easily convinced to change their behavioural patterns even when witnessing a "miracle". One must look no further than the wars the State of Israel has been forced to fight. Many a secular Jew will readily admit that Israel's victories were miraculous in nature, clearly showing that G-d does watch over his people. Yet this "belief" did not and does not translate into integrating G-d's demands into our lives. One must be psychologically prepared for such acceptance and the responsibilities that flow from it. Whether we come to acknowledge G-d through nature, an analysis of history or by studying His Torah, the way we interact with our fellow man must clearly show that G-d does play a role in our lives.