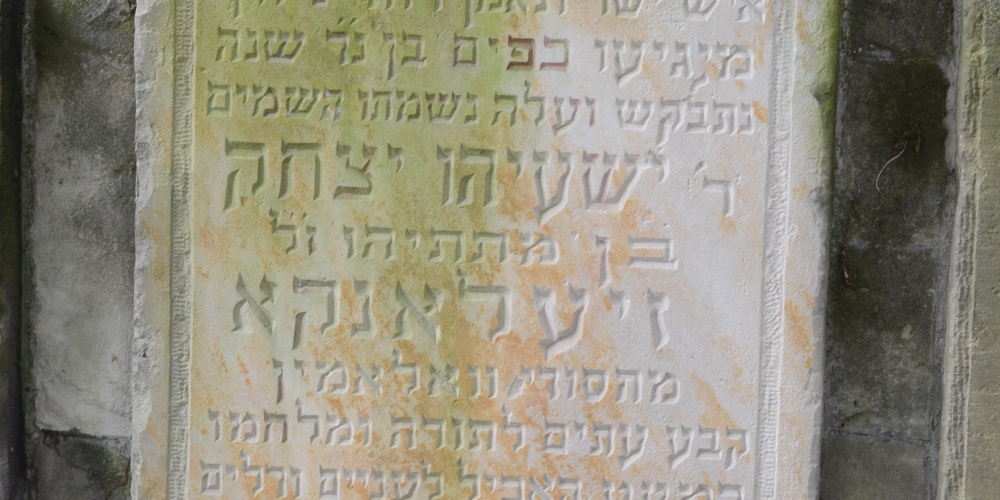 The Ramah, Rav Moshe Isserles, is probably the most famous and important figure to have lived in Krakow. Born in 1530 to a wealthy family, the name Isserles is a reference to his father, Isser or Yisrael. (As Shaul Stampfer and others have aptly demonstrated in discussing 19th century Lithuanian society, it was generally the wealthy who became Torah scholars, as the poor did not have the resources to obtain the top teachers for their children; I have no reason to believe it was much different throughout Jewish history.) He is most famous for writing the Mapah, the glosses that formed a "tablecloth" to the Shulchan Aruch, The Set Table, of Rav Yosef Karo--disagreeing where appropriate and recording the practices of Ashkenazic Jews when they differed from the Sephardic tradition.

What is less known is that his Mapah was an act of unbelievable humility. He, too, had been working on his own "Shulchan Aruch" (though I imagine he would have used a different name), unaware that Rav Yosef Karo was doing the same in Tzfat. When the Shulchan Aruch arrived in Krakow, the Ramah dropped his project midstream and decided to add glosses here and there. No longer would he publish his book with his own format, style, content and the like; instead, he took to basically writing a commentary on someone else's book. I know of few cases in either religious and secular literature where an author decides not to publish his magnum opus because someone else has published on the same topic. While it is unlikely the Ramah realized it then, this decision turned the Shulchan Aruch into the accepted code of the Jewish people, even some 450 years later. This was the first code that incorporated a broad spectrum of views, a factor that most likely contributed to its wide acceptance.

The shul was built by his father as a private family shul (it is now undergoing renovations). As the Chief Rabbi of Krakow, it is likely that the Ramah often davened in the "old shul" the main shul of Krakow. Build in the 15th century, it is the second oldest shul in Europe (the Alt Neui in Prague is the oldest).

While we generally associate such with Christian places of worship, the "backyard" of the shul is a cemetery and, in addition to the Ramah and his family, some of the other Rabbis of Krakow buried there include Rav Yom Tov Lippman Heller, author of the Tosafot Yom Tov on Mishnayot, and Rav Yoel Sirkis, more popularly known as the Bach based on his commentary on the Tur.

From Krakow we went to Auschwitz-Birkenau. We will honour the memory of the over 1,000,000 killed with silence.

We next travelled to Lodz, site of the second largest ghetto. It was the last to be liquidated--its level of production made it useful to the

Nazis--and unlike other ghettos where mass graves are the norm, those who died in the ghetto were given individual burial places. Which brings us to one of the most moving parts of our trip. Two brothers travelling with us knew their grandmother had died in the ghetto and were hoping to find her burial spot. The Lodz community has maintained excellent records of the cemetery--in fact, the rabbi of Lodz, a third generation Pole who was told by his grandfather that he was Jewish only when he turned 13, sees the maintenance of the burial plots of the over 180,000 Jews buried in Lodz as one of his primary roles. With the records, the grave was found in just a few minutes. This, as one can imagine, was a most emotional moment for the family.

But what happened next brought tears to our eyes. Our time in Lodz was the only time it rained during the trip, and we needed help in making a minyan. About 150 metres away was an Israeli tour group, and we decided to walk over and ask for a few men to help make a minyan for kaddish. Just at that moment, they started walking in the other direction. We chased after the last of the group, asking if he could bring a few friends over. About a minute later, the entire group of some 40 Israeli high school kids came over. To say they did not look like yeshiva bachurim would be a great understatement. Earrings in ears, noses, and everywhere else; tattoos; hair shaved in ways I had not seen before; etc., etc. There we all stood in the pouring rain, the tears from heaven, and when kaddish began, the boys put their hands on the heads of their friends and answered, אָמֵן יְהֵא שְׁמֵהּ רַבָּא מְבָרַךְ לְעָלַם וּלְעָלְמֵי עָלְמַיָּא...then they wanted to hear the story the brothers told. As I was leaving the cemetery, one of the girls came over to me to thank us for giving them the opportunity to join us.

The trip ended on a most upbeat note. As Kazimierz is to Krakow, Praga is to Warsaw. Today part of the city of Warsaw, it was a (separate) city where Jews moved when they were not allowed to live in Warsaw. Very few Jewish groups visit--but it is well worth the time. We stopped at the "old" Jewish cemetery which, unlike the "new" cemetery we visited on the first day of the trip, was greatly desecrated and is in a state of great disrepair. Dr. Shalom Berger, who was beyond outstanding (and much of what I have written over the past week is only due to what I learned from him), felt it would be a great act of kavod hamet to visit this neglected cemetery and to pay respect to the simple folk buried there--those of means were generally buried in the cemetery in Warsaw.

The cemetery is in the midst of restoration, and the work done so far was wonderful to see. (As Rabbi Shalom noted, being buried in a cemetery after a full life is the happy story of Poland). No fancy tombstones or pictorial scenes, but plain simple devout Jews. One simple, typical tombstone read, Ish yashar vneeman...nizon myigah kapav...kavah itim leTorah umelachmav ham eat he'echeel leanim vdalim niftar bshem tov, "a straight and trustworthy man, he supported himself by the work of his hands, he set aside time for the study of Torah and from the little bread that he had he fed the poor and the destitute, he died with a good name".

From the cemetery we went to the zoo. Yes, the Warsaw Zoo (situated in Praga). Not because we wanted to note how humans had become lower than any animal, nor to see the variety of animals there, but to hear and "see" a remarkable story. The curator of the zoo, Jan Zabinski, who had free access to the ghetto over the course of the war, hid some 300 people in his extensive and secret basement. On the many occasions when Nazi officials visited, his wife would go to the piano (the original is still in the home) and play a piece from Jaques Offenbachers' operetta Go, go, go to Crete signalling those hiding that they should go through the myriad tunnels that led to some empty cages in the zoo. The Zabinskis were among the over 5,000 Poles who were recognized by Yad Vashem's chasdei umot haolam--who together saved over 30,000 Jews. It may not be easy, but evil can be defeated. Am Yisrael chai!