Ta'anit 2: Rain for the New Year 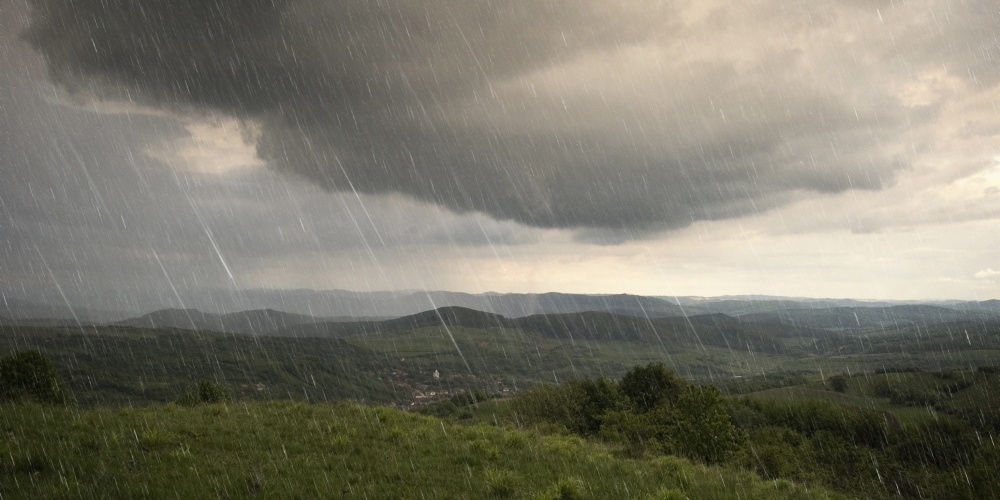 “Meiemati, from when does one begin mentioning gevurat geshamim, the strength of the rain?” (Ta’anit 2a). The opening Mishna of masechet Ta’anit begins by asking when one should start reciting masheev haruach umoreed hageshem.

The Gemara is troubled by the opening word meiemati, from when. Tanna heicha kai, where is the Tanna, the teacher, of our Mishna coming from, the Gemara wants to know. Asking “when” presupposes “if,” and yet the Tanna of our Mishna has not established an obligation to say masheev haruach umoreed hageshem in the first place[1].

The Gemara suggests that the Tanna of our Mishna was teaching an earlier Mishna that, “One mentions the might of the rains in [the blessing] of mechayei hameiteem, one requests rain in [the blessing] birchat hashanim and [the blessing] havdallah in chonen hada’at”. The Gemara rejects this answer, not for substantive reasoning, but for stylistic ones. The above Mishna appears way back in masechet Brachot, the first of the 63 tractates of the Talmud. Masechet Ta’anit is near the end of seder Moed, some 18 tractates later. Had the Mishna in Brachot been the springboard for our Tanna, then this first Mishna of masechet Ta’anit should have appeared back in masechet Brachot[2]. The fact that it is here indicates there is no connection between these two; in other words, these two teachings are from two different Tannaim and are unrelated to each other.

This is a fascinating insight into the editing of the Talmud and Rabbinic thinking. The Mishna in Brachot clearly states that one must recite masheev haruach umoreed hageshem,something that is missing from the Mishna in Rosh Hashanah. Yet our Sages took it as a given – so obvious that it need not be stated – that if G-d is judging us for something we must include that in our prayers. If we are judged regarding water on Sukkot then we must pray for rain on Sukkot. Yet in a most beautiful halacha, our Sages ruled that we do not actually begin the daily prayer for rain, vten tal umatar, until 15 days after Sukkot ends[3]. This allows the last of those who came to Jerusalem for Sukkot to get home. To pray for rain while fellow Jews are travelling home would display a lack of sensitivity. The rain can wait.

But before we pray we must praise; it is for this reason the essence of Shemoneh Esrei, the 13 petitionary prayers, are preceded by three blessings of shevach, praise. Hence the opening question of our Mishna, when should we begin reciting masheev haruach umoreed hageshem, offering praise to G-d for His bringing winds and rain to the world.

There would seem to be little reason not to begin on the first day of Sukkot, the beginning of the rainy season and the time when the judgement regarding rain begins. And this is the view of Rabbi Eliezer. Rabbi Yehoshua counters that since we don’t actually want it to rain on Sukkot – such being a sign of G-d’s displeasure with us - we should begin masseev haruach umoreed hageshem only on Shmini Atzeret, there no longer being an obligation to sit in a sukkah. With masseev haruach being a praise and not prayer, these Tannaim argue as to whether we should say it during the beginning of the rainy season even if in practice we would prefer it not rain.

Moreover, the opening question is based on the fact that there is a specific order in which our Tanaim learned and recorded the Mishna. The Tanaim would not begin a discussion in one masechet and finish it some 18 masechtotlater, but may do so from one masechet to the next.  Form and structure was most important to our Talmudic Sages[4].

The juxtaposition of Rosh Hashana and Taanit allowed the Tanna of our Mishna to expand upon the teachings found in masechet Rosh Hashanah. Yet other than the lengths of the masechtot there appears little reason to specifically connect these two tractates. The corpus of the Mishna is divided into six sedarim, orders, each with its overarching theme. Within each seder the order of the masechtot is, with very few exceptions, based on the number of chapters in each masechet. Seder Moed begins with masechet Shabbat and its 24 chapters followed by Eiruvin and Pesachim with 10 chapters each, Shekalim and Yoma with 8 chapters, Sukkah and Beitza with five chapters; Rosh Hashanah, Ta’anit and Megillah with four chapters, followed by Moed Katan and Chagigah with three each.

However, upon closer examination there is much to connect these two tractates. We will discuss just one link. Rosh Hashanah has as its primary theme G-d Kingship over the world. It is the focus of our davening on Rosh Hashanah[5] and it is through the shofar we proclaim G-d’s kingship. G-d’s power is most manifest through His control of nature – hence the term gevurat geshamim, the power of rain. And it is through rain or the lack thereof that G-d telegraphs His pleasure or lack thereof in our behaviour. A prolonged lack of rain would lead to a series of fast days. As the drought continued all would gather for prayer in the public square, the shofar would be blown and the prayers of zichronot and shofarot, said on Rosh Hashanah would be added.

[1] We have a similar, even more pronounced, problem regarding the opening words of the masechet Brachot the opening masechet of the Talmud. “From when may one recite the shema in the evening?” the Tanna begins. Here too the Gemara asks, Tanna heicah kai,how can one ask when before establishing that there is in fact an actual obligation to recite the shema? With no Mishna beforehand, our Tanna, the Gemara explains, is referencing a Biblical verse.

[2] The Gemara does not explain why in fact it does not appear in masechet Brachot. We might suggest that the Tanna of the Mishna in Brachot was unaware of a debate on this issue and assumed the time to start was a given. Alternatively, the 5th chapter of Brachot deals with what we must say, and how we must say the Amidah. The exact technical details of when exactly we start saying such did not interest the Mishna. If you have a better suggestion I would love to hear it.

[3] What we call tefillat geshem, the prayer for rain said today on Shmini Atzeret, is of post-Talmudic origin. With the destruction of the Temple there was no reason to travel to Jerusalem for the festivals.

[4] This associative phenomenon is quite common in Talmudic literature. For example, the opening lines of the Gemara in masechet Makkot explain that the Tanna of the Mishna “is coming from there,” i.e. from masechet Sanhedrin, which immediately precedes. It is because the Tanna views Makkot as a continuation of Sanhedrin that the Mishna begins with those cases where the laws of eideem zomemeem do not apply.

[5] While it is masechet Brachot that deals with the notion of prayer, there is almost no mention of what we actually pray for. In contrast, the order and structure of the davening of Rosh Hashanah is clearly spelled out in masechet Rosh Hashanah.