Sukkot: No Pain, No Gain 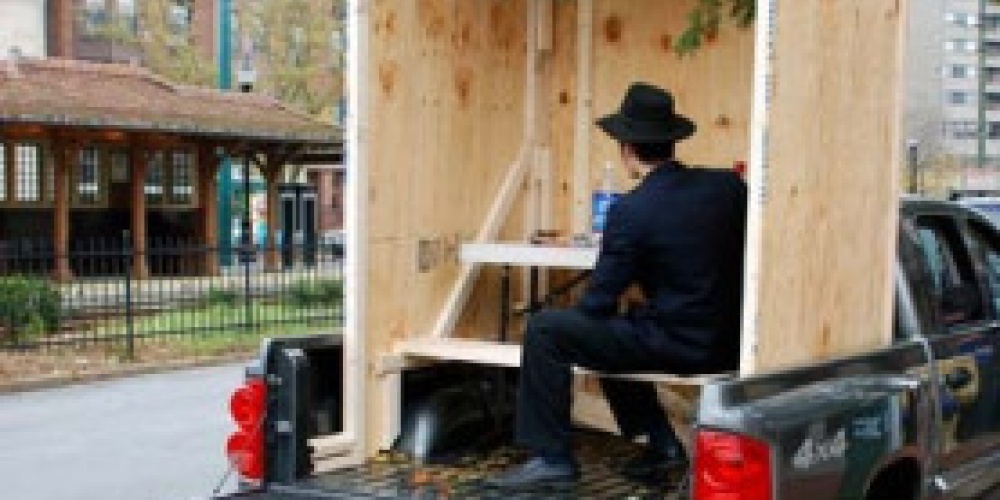 The Talmud classifies sukkah as a mitzvah kalla, a light and easy mitzvah. Where one must be almost deathly ill before one is permitted to eat on Yom Kippur or to violate many other Torah prohibitions, such is not the case with the sukkah. Here, a little discomfort—some rain, very hot weather, a few bees—and one may leave the sukkah; "mitztaer patur misukah", one who is uncomfortable is exempt from the mitzvah of sukkah. Should one leave the sukkah because of rain, even if it stops raining, one does not have to return to the sukkah to finish the meal—despite the fact that it may have turned into a beautiful day outside.

Why is such a leniency granted to the sukkah? Imagine if we invoked this principle on Yom Kippur!

Perhaps one might say that Sukkot, our z'man simchateinu, the holiday in which being joyous is most stressed, is a time to avoid all discomfort, even at the cost of the mitzvah of eating in the sukkah. The Talmud (Sukkah 25b) exempts a recently married couple and their entire entourage from sitting in the sukkah, as squeezing so many people into a sukkah would be uncomfortable, and would diminish the joy of both the festival and the wedding celebration[1].

From a halachic point of view, the exemption of mitztaer flows from the fact that our sukkah is our home for the week. And if our home heating system were to break, or the roof leak, we would go elsewhere until the repairs are completed. We need not be more strict regarding dwelling in the sukkah.

Yet perhaps the exemption is connected to the underlying motifs of the festival. In rabbinic literature, sukkot is known simply as chag, the holiday. It is the culmination of our festival season, whether the shalosh regalim of Pesach, Shavuot and Sukkot, or the Tishrei holidays of Rosh Hashanah, Yom Kippur and Sukkot.

Sukkot is the time to celebrate our renewed and strengthened relationship with G-d and our fellow man that we worked so hard to burnish during the Yamim Noraim. Sukkot also marks the culmination of the harvest season and our acknowledgement of G-d's role in nature, a process that begins with the korban haomer, the barley offering, on Pesach and culminates with nisuch hamayim, water libation, on Sukkot—water being the essential ingredient for life.

Each of the shalosh regalim also celebrates great historical events in the founding of our people. We celebrate the Exodus on Pesach, and the receiving of the Torah on Shavuot. Yet the ultimate goal was, and is, to implement the Torah as we build a great society in the land of Israel. And it is Sukkot that celebrates our ongoing journey toward this culminating mission. It took the generation that left Israel 40 years in which the sukkah protected them in the desert, and it has taken us 2,000 years of wandering in which the flimsy nature of "our sukkah" was all too apparent.

Sukkot is the holiday when we look to the future—as is evident by the choice of haftarot for the holiday—to the day when the Sukkah of Peace will be spread upon us, when the various types of Jews represented by the four species will join together[2]. This is the journey on which Sukkot urges us to embark. And the journey can be long, uncomfortable and even painful. But just as an army, a hockey team, or a business can be brought down by those who aren't willing to endure the hard work and pain on the road to success, the Jewish people can only succeed if we are all on board[3].

Abraham, speaking to the two servants who accompanied him as he journeyed to the sacrifice, told them, "You stay here with the donkey, and I and the lad will go yonder" (22:5). One must be willing to sacrifice—and pray that G-d does not ask us to do so.

The lowly arava must be taken with the etrog; even the assimilated Jew is part of our community. However, only those who are willing to work hard and put up with some discomfort can help to fulfill the mission. Those who can't be bothered by the call of Jewish history are to be welcomed into our Sukkot, but they cannot help build it[4]. May we merit a beautiful Sukkot, so that there is no need to exempt ourselves from the mitzvah of sukkah.

[1] While the mitzvah to celebrate the joy of Sukkot precludes one from marrying on Sukkot itself, apparently, weddings were quite common occurrences between Yom Kippur and Sukkot. Yom Kippur itself was, in Talmudic times, a day where singles were to mingle and meet (see Ta'anit 26b).

[2] Rabbinic literature is replete with the imagery of the four species representing the wide range of world Jewry, from the most observant to the most assimilated, and everyone in between.

[3] Interestingly, Jewish law may actually forbid one to sit in a sukkah in the rain. Even those who opine that such is only true after the first night acknowledge that if one has guests, one should not wait and see if the rain will clear.

[4] This is an important message for those of us still living in the Diaspora.