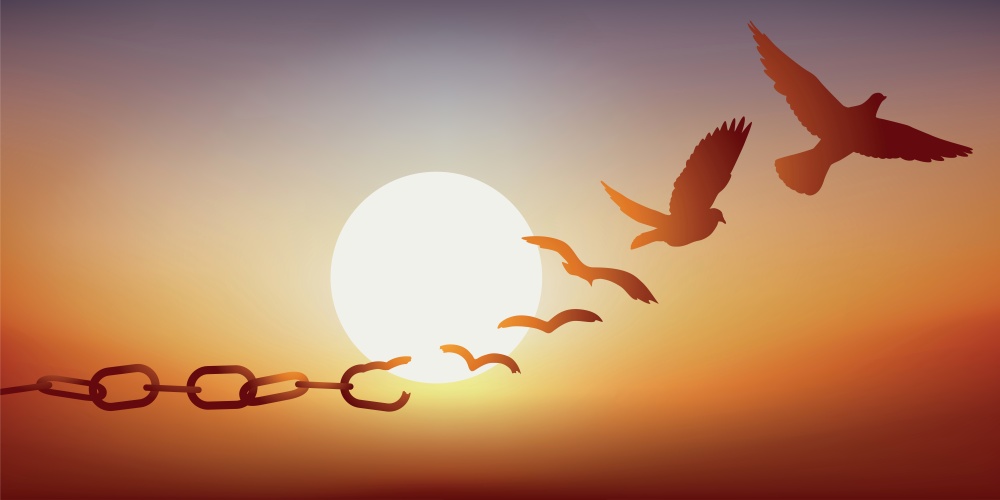 Judaism and modern western thought both teach the supremacy of man's freedom of choice. For modern man, freedom is rooted in the notion of individual rights, guaranteed by the United States Constitution or the Charter of Rights. Man has the right to pursue happiness, provided he causes no harm to others. For Jews, the importance of freedom is rooted in morality, not liberty. Only with the ability to choose evil does the choice of good merit praise. The entire notion of reward and punishment is rooted in the doctrine of free choice. "All is in the hands of heaven except for the fear of heaven." G-d may control the universe, but whether we will be righteous or not is solely dependent on us.

While we have freedom to choose the direction of our lives, we all recognize that there are limits to our freedom. In fact, without limits, anarchy will reign. Freedom is thereby enhanced by a clear delineation of those "red lines" that may not be crossed. It is the placement of these limits that determine the values of any given person or society. For some, the only limits are those where no overt harm is perpetrated on others, whereas for others, limits extend to the private life of the individual. Judaism clearly subscribes to this second notion. Our personal freedoms must often give way to divine command, a notion that is totally foreign to modern man.

Yet so much of what makes up our view of the world was chosen for us. Where and when we were born will greatly influence our mode of thinking and action. And, of course, parents constantly make choices for their children, choices that will shape their view of the world. It is for this reason that our founder, Abraham, was forced to leave his surroundings. This revolutionary, who so radically differed from those around him, had to leave his environment in order to implement his message of ethical monotheism. It was not easy for Abraham. He had to put up with famine, the kidnapping of his wife, a parting of ways with his nephew, and a war, not to mention his and Sarah's concern over their infertility. Yet despite all these tribulations, Abraham remains "Abraham, who loved me" (haftarah). Thus, G-d is ready to enter into a covenant with "the father of a multitude of nations" (17:3). "This is my covenant, which you shall keep between Me and you and your descendants after you: Every male among you shall be circumcised... and that shall be the sign of the covenant between Me and you" (Genesis 17:10-11).

This covenant is carried out on a child without his informed consent. We are mandated to make choices for our children, choices that will leave their indelible mark, both physically and spiritually. We remove part of our bodies to teach us that Judaism, while recognizing the physical aspect of man, emphasizes our spiritual potential. Not surprisingly, this reminder comes in a place on the body that is a centre for physical pleasure, whose act is carried out in private. Spiritual strength in general is best exhibited in private actions.

Jewish survival is dependent, first and foremost, on having babies. Thus, the first mitzvah of the Torah is to be fruitful and multiply. But we must teach our children that being Jewish involves sacrifice, and the channeling of our physical strengths for the moral betterment of this world. Sometimes we must forgo our free choice. Thus, brit milah is the second mitzvah of the Torah. One who does not understand this and ignores the precept of brit milah "shall be cut off from its people: he has invalidated My covenant" (17:14).

Jews, even those estranged from other precepts of our religion, have tenaciously insisted on performing this mitzvah, often risking their lives to do so. Jews have instinctively understood the underlying principles of the covenant with G-d, guaranteeing that the message of Judaism will remain eternal.