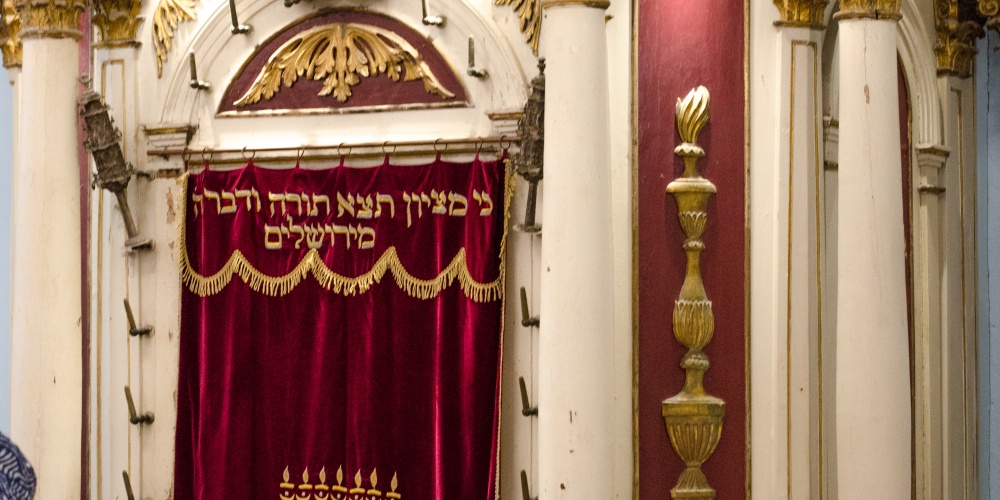 One of the beautiful experiences in travelling around the Jewish world is seeing the richness and diversity of Jewish life. I imagine not many on this list have ever heard laining in the Romaniote (Greek) tradition. Its beautiful tune is similar to, but also distinct from, other Sephardic traditions. The sefer Torah we used was borrowed from the Kahal Kadosh Yashan of Ioannina, the largest shul in Greece. Reading the beautiful parochet, one notices that the sefer Torah was gifted to the shul over 100 years ago, as thanksgiving for a “miracle” that happened to the benefactor.

We did not daven in the shul, partially because it was a long walk from our hotel, but mostly because the community no longer can support a minyan. The shul does function twice a year—on Yom Kippur and on Yom Hashoah. Many Jews of Ioanninan origin come back to their family roots to daven in the community for Yom Kippur, and this past year, over 500 people came. Davening is led by Haim, who is blessed with a beautiful, sweet voice—and doubles as a flawless ba’al koreh[1].

When visiting the shul on Friday, Haim blew his 150-year-old Romaniote shofar, inherited from his grandfather. Sadly, the special manufacturing process for this unique type of shofar has been lost, and Haim’s is one of only three known Romaniote shofarot remaining in the world—the others being owned by the community of Ioannina and the Romaniote shul in the Lower East Side. I do not recall hearing a longer tekiah gedolah than the one Haim blew during our visit. This followed a moving, special kinnah composed for those who perished in the Holocaust—one I hope to introduce in Toronto this year.

Of the 1,850 Jews deported to Auschwitz in March of 1944, only 163 survived the war. Fortunately, over half the community, one that has existed since the 8th century, had emigrated, mainly to the Lower East Side, in the early part of the 20th century. The impetus for many to leave was the law passed in 1924 forbidding all commerce on Sundays, causing Jewish merchants—this was a community of traditional Jews—great economic harm. The names of all those murdered are listed on the walls of the shul. On Yom Hashaoh, the only other day it functions, the shul is graced by many non-Jewish dignitaries and politicians. In Greece, the government not only compensated the community for the heavy losses suffered, but returned the private homes that were owned by members of the community. The sale of many of these residences—and the rent that continues to be collected on others to this day—helps to fund maintenance of this large shul and the local cemetery.

The shul was spared from destruction due to the mayor of the city defiantly telling the German occupiers that the building was needed for a library.

While we did not have the opportunity to daven in the shul on Shabbat, we davened in a very special place. The Hotel du Lac in Ioannina is most beautiful, enhanced by the surrounding rivers and mountains. But such is not what makes this hotel special. What makes it so is the fact that the owners of the hotel hid and saved Jews in their country home during the Holocaust. To say that the hotel did everything to meet our needs would be an understatement. It even has “Shabbat keys”, a rarity today in a five-star hotel.

Travelling from Ioannina to Salonika, we visited the picturesque town of Veria, one that dates back thousands of years. The present shul was constructed in 1850, and is believed to be on the same spot as previous shuls dating back some 2,000 years. Paul the Apostle visited Veira twice[2], and Christians believe he preached the new Christian faith to the Jewish community in the shul itself[3].

The present shul was left in ruins by the Nazis, who rounded up the 850 Jews [4] of Veria on the last day of Pesach, 1943. Almost no one survived and today, Veira is home to one Jewish woman.

The town has restored not only the shul, but the Jewish quarter itself. One can vividly see זכר לחורבן 1882 on the outside wall of what was the rabbi’s house, and  אִם אֶשְׁכָּחֵךְ יְרוּשָׁלִָם on a home across the street. Much of the work has been spearheaded by a non-Jewish volunteer who warmly greeted us upon our arrival.

From Veira we travelled to Salonika, an ir veim b’yisrael[5], and please G-d, the subject of our next post.

[1] In my last post, I mentioned how Romaniote shuls place the bimah at the back of the shul. What I forgot to mention is that the word “bimah” comes from the Greek word “bema”, which means a step or raised place.

[2] It is worth noting that Greece is likely the most religious county in the EU. Over 90% of its citizens identify with the Greek Orthodox Church, and less than 1% with the Roman Catholic church.

[3] It is important to recall that 100% of early Christians were Jews, and the most natural place for Paul to preach would be in a shul. The bracha of velemalshinim, against heretics, was composed against the Hebrew Christians who were the forerunners of Christianity, which at that point was still a Jewish sect.

[4] While we may think of a community of 850 Jews as small thoroughout our history many vibrant communites functioned with many less. The only such examples we have today are the communites of Gibraltar (where we spend Shabbat on our Spain trip) and Gerba. The former has four active shuls for its 750 Jews and the latter 12 shuls for its 1,200 Jewish inhabitants. In both communites there is no public chilul Shabbat.

[5] This is a term used to describe a city of great Jewish importance.