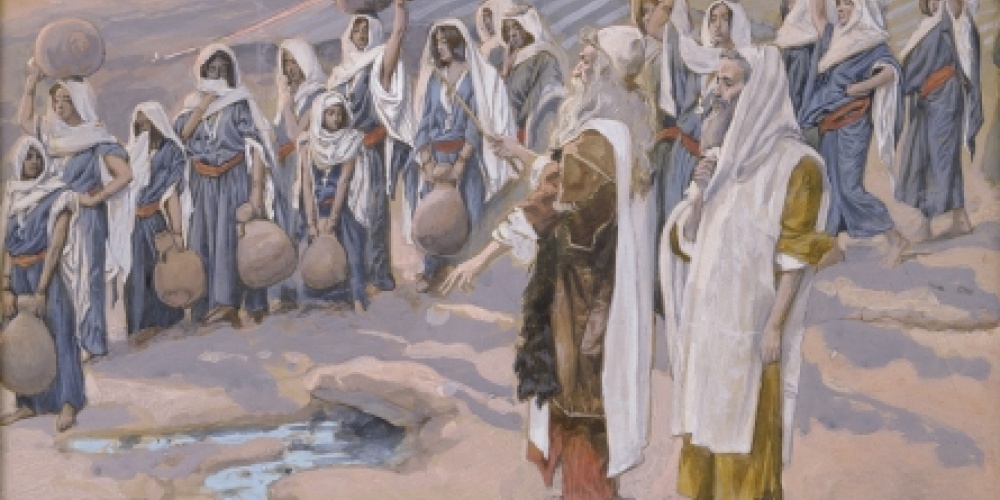 Throughout the Exodus story, the Jewish people are silent. We do not know what they were thinking or doing during the plagues. We hear them rejoicing when Moshe first arrives with the message of redemption (Shemot 4:31), and complaining when his initial meeting with Pharaoh ends with an even more onerous slavery. But that is all we hear of them until just before the 10th plague when, to be worthy of redemption, the people were commanded to slaughter a sheep and place its blood on the doorpost. Yet the actual voices of the Jewish people remain silent until they have left Egypt. And the first words appear far from pretty. "And they said to Moshe, are there not enough graves in Egypt that you took us to die in the desert?" (Shemot 14:11).

Our Sages are most critical of the ongoing complaining of the Jewish people. After all that G-d had done for them, after all the miracles they witnessed, how could they show such ingratitude, such lack of faith, such pettiness? Yet much of this critique is not to be found in the Biblical text itself. Can we really expect more of the people? What an amazing display of faith to go to the unknown desert, leaving behind, in their own words, "the fleshpots of Egypt".

With the Egyptians chasing from behind and the sea in front, what else should one do besides fear for the worst? It's not like they knew how to fight. And in fact, G-d seems to be "angry" at Moshe, telling him, "Why do cry out to Me? Speak to the Jewish people and have them journey" (Shemot 14:15). But there is no anger expressed to the people themselves, who reacted in a perfectly normal manner.

This pattern repeats itself throughout Parshat Beshalach. "The Jewish people saw the great hand that G-d unleashed on the Egyptians; the people were in awe of G-d, and they believed in G-d and in His servant Moshe" (Shemot 14:31). The Torah appears very complimentary of the Jewish people. They had spent hundreds of years in a culture suffused with idol worship and in a relatively short time had rejected such, embracing G-d and His servant, Moshe. Yet Rashi views this negatively—G-d had to have the bodies of the Egyptians flung from the sea, so that the Jewish people could actually see the dead. Otherwise, they would be tempted to say, "as we come out on the one side, they come out on the other side".

When the Jewish people, travelling for three days in the desert without water, complained that there was no water to drink (Shemot 15:24), their "complaining" was answered by G-d providing "sweet waters". A reasonable response to a reasonable "complaint". Yet Rashi saw this as a test the Jewish people had failed—demonstrating that they are a stiff-necked people. Why?

Moving from the Seen desert to Refidim, once again "there was no water for the nation to drink" (Shemot 17:1). And once again, the people complained—"Why did you bring me out of Egypt to kill me, my children, and my livestock with thirst?" (Shemot 17:3). Moshe was exasperated:"What shall I do for this people?", and he named the place Masah uMereeva, testing and arguments, understanding that the people had failed another test. Yet that does not seem to be the perspective of G-d, Who calmly told Moshe to take a stick, hit the rock and water would be had for all. Once again, the Jewish people were understandably upset and once again, Rashi views the actions of the people most negatively. So much so that Rashi—who is reflecting a common view amongst the Sages—claims that the next verse describing the attack of Amalek was a response to the question of the Jewish people of whether G-d was in their midst. Now you will see what can happen if G-d is not in your midst.

Yet once again, while one may read this into the text, one need not do so. Amalek, like Egypt before them, attacked the Jews without reason or provocation. And once again, it will be G-d and His messengers who will fight on behalf of the Jewish people. As during the ten plagues, we do not hear from the people, unaware of their thoughts or actions. Amalek hates G-d and takes that anger out against His people regardless of the actions the Jewish people may or may not take. This is, as the Torah makes clear, a "war for G-d", and presumably not man.

The discrepancy between the written word and its interpretation is striking. In some ways, it is a matter of perspective. One can judge the Jewish people harshly for their murmurings, and one could give this group of slaves tremendous credit for their amazing faith—and both would be true. Shall we read the Torah with the attribute of mercy uppermost or should it be read focusing on justice? Reflecting G-d's infinite mercy and man's great difficulty in displaying such, the written Torah of G-d reflects mercy, whereas the Oral Law developed by man takes a harsher approach.

The Torah, while detailing the events of the Exodus, was written as a book of morals and ethics, not one of history. It was written to teach us, not to describe what happened to our ancestors. The Jewish people in the desert were a band of slaves who occasionally rose to great heights, and at other times acted as slaves are wont to do. It is unlikely we would do better. The written Torah reflects that. However, Rashi and many of our Sages were addressing us, who do not have such excuses. It is we who must learn the perils of complaining, of distrust and murmurings. That is reflected in the critique that lay just beneath the surface of the text.