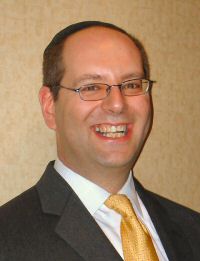 Rabbi Shaul Robinson took up the position of Senior Rabbi at Lincoln Square Synagogue on September 1, 2005. Rabbi Robinson was born in Glasgow, Scotland, in 1967 and earned a Bachelor of Arts (BA) degree in Economics and Political Science at the University of Strathclyde, Scotland. He was also awarded a Masters of Business Administration (MBA) with Distinction from the University of Nottingham, England. His MBA focused on the management of Not-for-Profit institutions and his dissertation was titled "The Working Lives of Rabbis".

Rabbi Robinson attended Yeshivat HaMivtar and the Joseph Straus Rabbinic Seminary in Efrat for seven years where he studied under Rabbi Chaim Brovender and Rabbi Shlomo Riskin. He attained semicha from the Joseph Straus Rabbinical Seminary (part of Ohr Torah Stone). His semichas were awarded by The Chief Rabbinate of Israel, Rabbi Riskin and Rabbi Brovender, and also by Rabbi Zalman Nechemia Goldberg. He also undertook one year of professional training in Practical Rabbinics at Yad AviHaYishuv (Rothschild Foundation) in Jerusalem .

After graduation from Strathclyde, Rabbi Robinson spent a year as the National Secretary of the Union of Jewish Students, which combined fieldwork on behalf of Jewish students with the publication and coordination of educational materials.

Rabbi Robinson met his wife, Sarah, while in Israel and they married in 1992. Following that, he was appointed the first ever full-time Rabbi for Jewish Students at Cambridge University, England, where he and Sarah lived for 3 years with their children, Avrami and Esther. In 1997, the Robinsons moved to Barnet Synagogue, England, where he took up a part-time role and before becoming the full-time Rabbi in 1998. Over the years, the Robinsons welcomed four more daughters - Chaya in 1998, Ariela in 2000, and twins, Tova and Tehilla in 2003. During his time at Barnet, Rabbi Robinson also served as Director of the Centre for Rabbinic Development - where he set up and directed the first ever "Department for Professional Rabbinic Development" in the UK . He was also Executive Director of "Encounter" - the organization that runs the UK 's largest Orthodox Adult Education Event.