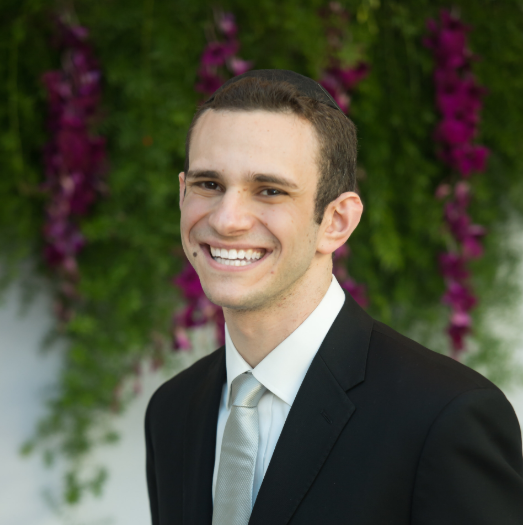 Rabbi Sammy Bergman grew up in Elizabeth, New Jersey where he ran the local Teen minyan, and often led Friday night ongim. After finishing high school at Rav Teitz Mesivta Academy in Elizabeth, Rabbi Bergman studied in Yeshivat Sha’alvim for two years, where his love for Torah and Ruach (inspiration) continued to blossom. He then attended Yeshiva University, where he was a member of the Masmidim Honors Program, and he received a B.A. in Accounting from the Sy Syms School of Business. He received his rabbinic ordination from the Rabbi Isaac Elchanan Theological seminary, where he was a fellow of the Wexner Semichah Honors Program.

Always looking to utilize his talents to teach and inspire others, Rabbi Bergman has served as a Rabbinic Intern for the Riverdale Jewish Center, the Young Israel of Jamaica Estates, and Congregation Ahavath Torah in Englewood, NJ. Over the course of his internships, Rabbi Bergman cultivated his ability to connect with congregants of varying levels of Jewish education. After completing ordination, Rabbi Bergman taught at both Rambam Mesivta, and North Shore Hebrew Academy high school. As a rebbe, Rabbi Bergman was known not only for his engaging and inspiring shiurim but for his passion for developing warm relationships with his students.

Rabbi Bergman is married to Dr. Ahuva Bergman, who works as a pediatrician. They have a daughter named Miriam who is 4 years old and will be starting junior kindergarten at Netivot HaTorah Day School. The Bergmans will be living in the Bathurst-Lawrence area, and are excited to become members of the Shaarei Shomayim community, where Rabbi Bergman will serve as a Rabbinic Assistant.