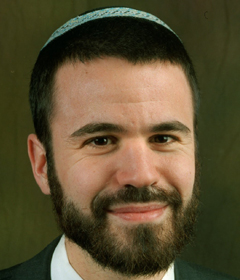 Rabbi Torczyner has served as the founding Rosh Beit Midrash of Toronto’s Beit Midrash Zichron Dov since Elul 2009. The Beit Midrash trains its avreichim toward pulpit, classroom and communal leadership, and also serves as a community Torah resource for the Greater Toronto Area and beyond.

Prior to this, Rabbi Torczyner served for four years as the rabbi of Congregation Ohawe Sholam – Young Israel of Pawtucket, Rhode Island.

Rabbi Torczyner grew up on Long Island, NY. After high school, he spent two years at Yeshivat Kerem beYavneh in Israel. Upon returning to America, he studied at Yeshiva University where he completed a BA in computer science and received semicha from its Rabbi Elchanan Theological Seminary. While studying for ordination, he also studied toward a Masters in Computer Science at New York University's Courant Institute.

Rabbi Torczyner has been a member of the RCA since 1997. He has served on the RCA’s Executive Committee, its JPEG committee to create standards for ethical conduct in industry, and its Joint Kashrus Committee working with the OU. He has chaired the RCA’s Resolutions Committee, its Technology Committee, and serves in other capacities, as well.

Rabbi Torczyner's efforts to spread Torah go beyond his immediate community. He maintains two websites which are designed to spread Torah to anyone interested in increasing their Jewish awareness. One site, WebShas, provides a topical index to the Talmud. The other site, HaMakor, provides bibliographic references to classic Judaic texts, on a range of popular topics. Rabbi Torczyner also sends out two daily educational emails, one containing a Torah Thought and the other a Jewish law. To subscribe to either of these free emails, please email Rabbi Torczyner. Rabbi Torczyner also blogs at The Rebbetzin’s Husband.