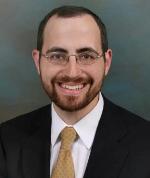 A native of West Orange, New Jersey, Rabbi Chaim Strauchler received his ordination from Rabbi Isaac Elchanon Theological Seminary of Yeshiva University. Before joining Shaarei Shomayim in August 2008, Rabbi Strauchler served as rabbi at Beit Chaverim Synagogue in Westport, Connecticut from 2005 to 2008. Rabbi Strauchler believes the role of a rabbi is to care for people. This entails being there for them in their time of need, to shepherd them through the ups and downs of life, and at the same time to inspire them to be a catalyst for personal spiritual growth. He sees the shul as a centre for addressing larger communal issues, as well as a place that cares for Jews in Toronto, Israel and elsewhere, as well as for the non-Jewish community.

In college, Rabbi Strauchler was a pre-med science student – following in his parents’ footsteps – before switching to English literature. He chose to enter the rabbinate because of the opportunity to share life with the Jewish people, teach and learn Torah in the trenches, and be with people during their best and worst times. He credits the legacy of his maternal grandfather, Rabbi Gershon Romanoff, with inspiring him to become a rabbi. Rabbi Romanoff studied at Yeshiva University under Rabbi Moshe Soloveichik in the 1930s, and died when Rabbi Strauchler was a year old.

Committed to Modern Orthodoxy, Rabbi Strauchler believes that the term 'Modern Orthodox' is useful in the sense that it reflects the basic problem of every Jew: Modernity is something that is ever present in our lives and brings many advantages. It also brings many challenges. In the modern age, people can choose. They can choose to be Jewish, they can choose not to live as a Jew. That did not exist before the modern era. At the same time, 'modern Orthodox' and 'Orthodox' are labels imposed upon individuals by others; fundamentally, we are Jews. Rabbi Strauchler stresses the importance of being able to see past the labels, towards the right and towards the left, to be able to look at a person for what they are, as opposed to the external dress they may have on at that moment.

The first Yeshiva University graduate to receive Oxford University's prestigious Rhodes Scholarship, he earned a diploma in theology and an master’s in religious studies while there. He then received a master's degree in Biblical studies from Bernard Revel Graduate School and is a Wexner Graduate Fellowship alumnus. He publishes scholarly articles on the Bible and the Talmud in addition to publishing his own poetry. He was also trained under Rabbi Jonathan Rosenblatt at Riverdale (NY) Jewish Center, from 2003 to 2005.